Recently the Environmental Working Group analyzed the latest research and government tests of supermarket meat to ferret out the truth about superbugs in meat. What they found were strands of antibiotic-resistant bacteria—so called “superbugs” that can trigger foodborne illness and infections that are hard to treat.

These little-noticed tests, the most recent in a series conducted by the National Antimicrobial Resistance Monitoring System, a joint project of the federal Food and Drug Administration, Centers for Disease Control and Prevention and U.S. Department of Agriculture, found that supermarket meat samples collected in 2011 harbored significant amounts of the superbug versions of salmonella and Campylobacter, which together cause 3.6 million cases of food poisoning a year.

Moreover, the researchers found that some 53 percent of raw chicken samples collected in 2011 were tainted with an antibiotic-resistant form of Escherichia coli, or E. coli, a microbe that normally inhabits feces. Certain strains of E. coli can cause diarrhea, urinary tract infections and pneumonia. The extent of antibiotic-resistant E. coli on chicken is alarming because bacteria readily share antibiotic-resistance genes.

Among the most worrisome recent developments: 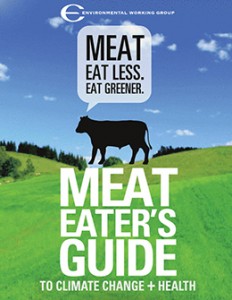 A significant contributor to the looming superbug crisis, according to scientists and health experts, is unnecessary antibiotic usage by factory farms that produce most of the 8.9 billion animals raised for food in theU.S.every year. Industrial livestock producers routinely dose their animals with pharmaceuticals, mostly administered with limited veterinary oversight and frequently without prescriptions, to encourage faster growth or prevent infection in crowded, stressful and often unsanitary living conditions.

For Tips To Help You Avoid Superbugs in Meat, check out EWG’s Downloadable tip sheet.

Make your voice heard! Click here to find out how you can help preserve the effectiveness of antibiotics.

To read the entire report or to take action, visit the EWG website and check out the Meat Eaters Guide To Climate Change and Health