Super Nutrient – Better Than Raisins in A Box 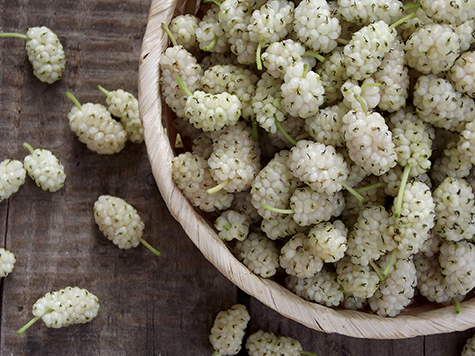 I’ve advocated “nutritional medicine” to my patients for years now.  After all, if Nature can help reduce their dependence on prescription medications, I’m all for it. So, when I learned about the nutritional/health benefits of this one amazing berry, I’ve been recommending it to my patients ever since.  Let me tell you about it too…

White mulberry (also known as Morus alba or Turkish mulberry) has been used in Asian medicine for some time.  Even though the plant is named “White mulberry”, the mulberry fruit itself can be different colors like black, purple, red, and white all on the same plant.  Whether you eat it in its natural state as a berry, or in its dried form (delicious – like raisins or dates), or take it in a capsule supplement, or drink it as a tea, white mulberry is a natural nutritional powerhouse that’s been cited for some incredible health benefits including the following:

1.  Blood sugar control – mulberry naturally contains 1-deoxynojrimicin, or DNJ, for short.  This is a compound that inhibits the absorption of sugar into your body which means that white mulberry can help your body excrete excess sugar in your blood.  This is a boon for both those trying to lose weight and people with diabetes.  Lowered blood sugar levels means less fat storage, more fat burning.  They even contain about the same amount of protein, 4 grams, in 1/3 cup, as 1 cup of cereal, which can also help stabilize blood sugar. If you have diabetes and want to make use of mulberry to help lower blood sugar, you will likely have to decrease your antidiabetic medication to prevent low blood sugar events.

2.  Powerful antioxidant – mulberry contains a large amount of polyphenols – like tea and other fruits – that are powerful antioxidants.  Antioxidants fight free radical damage in your body which causes the onset of premature aging and disease.  As such, it is a powerful immune system booster.  Because of these properties, it’s reported that people who take white mulberry regularly look younger.  Some have also even experienced restoration of color to gray hair and less hair loss.  Some of the many antioxidants that they contain include anthocyanins, resveratrol, lutein, zeaxanthin, beta carotene, alpha carotene and Vitamin C and E.

3.  Colon Health – mulberries contain 20% of your daily fiber intake in just 1/3 cup of dried berries.  Fiber helps remove toxins and bad fats through your intestines before they are released into your blood stream where they can do damage to the rest of you.

4.  Heart Health – mulberry is frequently used in Asian medicine to remove bad cholesterol build up in the blood that can result in heart disease.  In addition, they’re rich in potassium – which helps regulate blood pressure.

5.  Brain Health – in a study out of Thailand’s Khon Kaen University, lab animals that ate mulberries showed better memory and performance with less oxidative stress.  It was found they also contain GABA (gamma amino butyric acid), which is a nervous system protectant.   It was concluded that mulberry could be used as a cognitive enhancer and neuroprotectant in humans against dementia and Parkinson’s disease.  Mulberry also contains good amounts of iron which helps carry more oxygen in the blood to the brain. 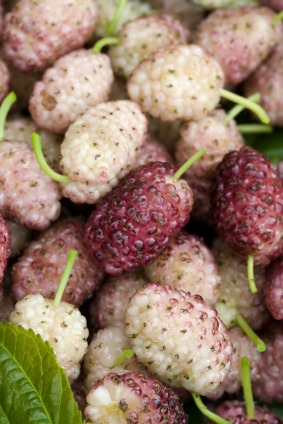 Even though Western medicine/health research has lagged behind in discovering what Asian practitioners have known about mulberry the superfruit for some time, you don’t have to wait any longer to reap its health benefits.  Try some mulberry as a snack – dried or fresh – or in its supplement form, or as a tea.

*Note:  If you’re undergoing chemotherapy for any form of cancer, mulberry can interfere with its action.  However, a substance in mulberry bark root extract, albanol, has been shown to trigger cancer cell death in leukemia.  If you have leukemia, you may want to consult a naturopathic physician about its use as an alternative to chemotherapy.