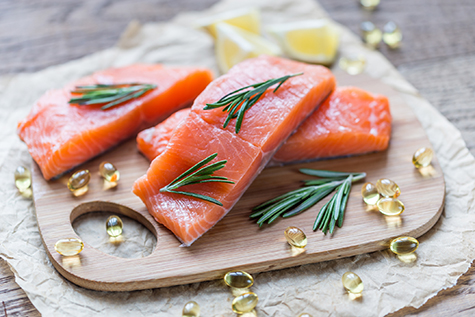 Since many of my patients and readers have entered the over 65 age bracket, or will in the near future, I always like to pass along anti-aging news and information that will help them live a stronger, healthier life well into their golden years.

In fact, many of my patients ask me what they can do to keep their mind and brain function at its best as they age, and reduce their risk of developing Alzheimer’s disease. I’m happy to tell them there is good news on this front. New research is out that shows promise in the fight against Alzheimer’s disease through consuming fish oil comprising of omega-3 fatty acids.

The new research I’d like to share that offers good news for the fight against Alzheimer’s disease comes as a result of The Women’s Health Initiative Memory Study (WHIMS-MRI Study). This study examined the levels of marine (i.e. fish) omega-3 fatty acids — consisting of ALA (α-Linolenic acid) found in plant oils, and EPA (eicosapentaenoic acid) and DHA (docosahexaenoic acid) — measured in the brains of post-menopausal women eight years after initial MRIs.

The conclusion of the study, which appears in the February 2014 issue of Neurology,indicates that women who have higher levels of omega-3 fatty acids in their systems have larger brain volumes. The research suggests that fish oil containing omega-3 fatty acids can help shield against Alzheimer’s based on the thought that shrinking brain volume, particularly in the elderly population, is associated with Alzheimer’s disease.

As a doctor who focuses on anti-aging strategies and techniques every day with my patients, I am excited to hear about this new research on the benefits of omega-3 fatty acids on the aging brain. Omega-3 fatty acids offer so many benefits to aging in a healthy, natural way, that I was thrilled to see yet another benefit added to the already long list.

So, just how good are omega-3 fatty acids for you? The University of Maryland Medical Center provides an outstanding list of benefits that reach almost every aspect of the human body from skin health to eyesight to brain function, including these listed below.

2. Heart Disease. Perhaps the one thing omega-3 is most famous for is the role it plays in preventing heart disease. This is where the benefits of omega-3 fatty acids really shine. Clinical studies continue to support the belief that EPA and DHA found in fish oil reduces heart disease risk factors including high blood pressure and cholesterol. Studies also support that idea that omega-3 prevents and treats hardening of the arteries.

4. Osteoporosis. Those who took fish oil supplements experienced a lower amount of bone loss over three years than women who took placebos instead, according to another study involving women over the age of 65 who had osteoporosis. Encouragingly, many of these women actually showed an increase in their bone density, thanks to fish oil.

5. Cognitive Decline. An increasing number of studies show evidence that reducing levels of omega-3 fatty acids results in cognitive decline commonly associated with aging, such as dementia and Alzheimer’s disease. Scientists now believe that DHA plays a protective role in defending the brain against Alzheimer’s disease and dementia.

6. Colorectal Cancer. Interestingly, Eskimos have a low incidence rate of colorectal cancer and tend to eat large amounts of fish that are plentiful in omega-3 fatty acids. Preliminary research is suggesting that daily ingestion of fish oil could help slow the progress of early stage colon cancer. Other studies have suggested that omega-3 fatty acids may prevent colon cancer from becoming worse.

7. Rheumatoid Arthritis. It’s important to understand that fish oil is not believed to slow the progression of Rheumatoid Arthritis (RA) or to reduce the damage the disease causes. However, evidence from multiple studies suggests that it helps reduce many of the symptoms of RA, including the swelling and inflammation that leads to joint pain. One study suggests that using fish oil may allow for lower doses of NSAIDs to reduce inflammation for people who suffer from rheumatoid arthritis. That’s a welcome finding for those who have trouble tolerating NSAIDs.

Increasing your intake of omega-3 fatty acids is a good thing for people from all walks of life who want to improve heart health, eye health, skin health, brain health, and of course defend against Alzheimer’s disease.

I tell patients to include foods in their diet that are rich in omega-3s, such as halibut, herring, oysters, salmon, sardines, trout, tuna, and mackerel. The American Heart Association recommends, and I concur, to eat two 3.5-ounce servings of cooked fish per week.

Include these cornucopia of foods in your diet and you’ll be well on your way of getting more of the essential omega-3 fatty acids into your daily eating regimen that are so vitally important to your healthy body and mind.