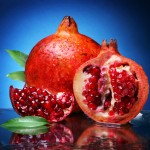 Researchers at England’s University of Huddersfield and the University of Freiburg in Germany report that punicalagin, a polyphenol compound occurring in pomegranate, inhibits damaging neuroinflammation activated by brain’s microglia:  central nervous system immune cells that play a role in Alzheimer’s disease. The findings, which could be utilized in the treatment of other types of inflammation, including that which occurs in Parkinson’s disease, were described in an article published on July 28, 2014 in the journal Molecular Nutrition & Food Research.

In a series of experiments, pretreatment with varying concentrations of punicalagin significantly inhibited the production of the inflammatory compounds tumor necrosis factor alpha, interleukin-6 and prostaglandin E2, in rat microglia exposed to the inflammation-inducing agent lipopolysaccharide (LPS). Researchers Olumakyokun Olajide and associates found that punicalagin interferes with the signaling of nuclear factor-kappa beta (NF-κB, a protein involved in immune function) via several mechanisms.

“These results suggest that punicalagin inhibits neuroinflammation in LPS-activated microglia through interference with NF-κB signaling, suggesting its potential as a nutritional preventive strategy in neurodegenerative disorders,” Dr Olajide and colleagues conclude.

The scientists plan to develop punicalagin derivatives that could form the basis of oral pharmaceutical compounds used for neuroinflammation.

“We do know that regular intake and regular consumption of pomegranate has a lot of health benefits – including prevention of neuroinflammation related to dementia,” noted Dr Olajide, who is a Senior Lecturer at the University of Huddersfield. “African mothers normally treat sick children with natural substances such as herbs. My mum certainly used a lot of those substances. And then I went on to study pharmacology!”