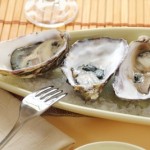 Like many of my patients, I share a love of oysters.  They taste great and are chock full of  health benefits such as being low in cholesterol, high in protein and B vitamins, a good source of vitamin A and C and also contain many important minerals like zinc, magnesium, iron, copper, iodine and phosphorus.

That said it could be a little tricky deriving the health benefits from oysters when you also have to contend with a real drawback – they can be poisonous.  That’s right; however, only when they are eaten raw or improperly steamed.  Let’s talk about how to avoid getting food poisoning from oysters and reap only their health benefits.

What’s So Bad About The Good Oyster?

Oysters have been enjoyed as a sea food for eons and have, as noted above, significant health benefits, especially for men. They contain a lot of zinc which can help with building or maintaining good testosterone production (likely why they’re touted as being an aphrodisiac!)  and are a good source of niacin, B3, which helps control cholesterol.

However, oysters also carry with them dangerous bacteria called vibrio vulnificus, awarm salt sea water-borne bacterium that can make you very, very ill or worse. In fact, vibrio poisoning is a significant problem in Japan where much raw seafood (sushi) is consumed daily.  Symptoms of eating vibrio infected food typically show up within 16 hours to 2 days and can include:

While the above noted symptoms occur frequently with food poisoning, the following are more likely related to food allergy and medical care should be sought immediately:

Anyone who consumes raw seafood on a regular basis, such as sushi restaurants, or other venues, ups their risk for the vibrio bacteria, as it can also be present in other warm salt-sea water food as well.  Others at risk for food poisoning by vibrio bacteria include:

How To Avoid Food Poisoning From Oysters

It’s important to remember that oysters have been enjoyed for centuries and continue to be a delicious and safe choice on the menu of many seafood restaurants that routinely take necessary storage and cooking precautions. If you are preparing oysters on your own, this is how to safely store and prepare them:

I enjoy cooked oysters whenever possible and I wholeheartedly recommend them. Eating oysters, and other shellfish, in a reputable restaurant should pose no concern of getting a vibrio infection.  If you prepare oysters on your own at home, just be sure to follow proper storage, handling and cooking precautions and you’ll reap the many health benefits of oysters and none of their health concern.