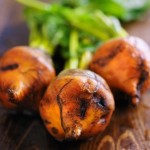 Scientists have long recognized the dangers of cadmium (Cd) exposure to the human body. This heavy metal is emerging as a major cause of vascular disorders, common cancers, osteoporosis, and kidney disease, and can also cause damage to the body’s reproductive and neurological systems. While tobacco smoke can be a significant source of exposure for smokers, the primary source of cadmium exposure for nonsmokers is through consumption of contaminated plant-based foods.

A survey of all previous pertinent research (meta-analysis), appearing recently in the British Journal of Nutrition, concluded that organically grown foods are on average 48 percent lower in Cd than conventionally grown foods. Now, in an invited commentary appearing in the same journal, Saint Luke’s Mid America Heart Institute cardiovascular research scientist James J. DiNicolantonio, Pharm.D., and Mark F. McCarty, B.A., place this finding in the context of the growing epidemiology linking Cd exposure to adverse health outcomes, and conclude that consistent consumption of organic foods over a lifetime could be expected to favorably influence health and mortality risk.

“For years, nutritionists and consumers have struggled with the question, ‘is organic really better?'” said Dr. DiNicolantonio. “What analysis of this research reveals is that, due to the serious health impacts of cadmium exposure and the markedly lower levels of Cd in organically grown foods, the long-term consumption of such foods is likely to be notably protective with respect to a wide range of common pathologies.”

Citing previous studies, DiNicolantonio and McCarty suggest that Cd contamination of chemical fertilizers may be primarily responsible for the higher Cd content of conventionally grown foods.

Dietary Cd is found primarily in grains, green vegetables, root vegetables, tubers, organ meat, and shellfish; hence, in nonsmokers, most Cd exposure derives from plant foods usually thought to be healthful. Although tiny amounts of Cd are excreted in the urine, the human body has no physiological mechanism for regulating its Cd levels, so levels tend to accumulate over time, with a half-life of 10-30 years. Clinically available chelation therapies are not helpful for coping with chronic Cd exposure, as most Cd accumulates in the interior of cells where chelating drugs cannot reach. Fortunately, research has shown that dietary zinc functions to counteract Cd toxicity. Cd is an important inducer of oxidative stress, and rodent studies suggest that the antioxidant activity of spirulina may also lessen the adverse health impact of Cd already in the body.

Nonsmokers who consistently choose organic foods throughout life, as compared to nonsmokers who rely on conventional agriculture, could be expected to experience about half the Cd exposure. By surveying recent epidemiological findings correlating body Cd levels with mortality risk, DiNicolantonio and McCarty estimate that consistent use of organic foods could result in a 20 percent reduction in total mortality.

The recent meta-analysis of organic foods also found that such foods tend to be about 30 percent higher in antioxidant phytochemicals, likely because many of these phytochemicals function to protect plants from pests; crops treated with pesticides may have less need for this protection. DiNicolantonio and McCarty point to research suggesting that higher dietary intake of polyphenolic antioxidants such as flavonoids may provide some protection to the vascular system.

Saint Luke’s Mid America Heart Institute, a member of Saint Luke’s Health System and a teaching affiliate of the University of Missouri-Kansas City, is one of the preeminent cardiovascular programs in the country. Its legacy of innovation began more than 25 years ago when it opened as the nation’s first heart hospital. Since then, the Heart Institute has earned a world-wide reputation for excellence in the treatment of heart disease, including interventional cardiology, cardiovascular surgery, imaging, heart failure, transplant, heart disease prevention, women’s heart disease, electrophysiology, outcomes research, and health economics. With more than 50 full-time board-certified cardiovascular specialists on staff, the Heart Institute offers one of the largest heart failure/heart transplant programs in the country, has the largest experience with transcatheter aortic valve replacement in the Midwest, and is a global teaching site for the newest approaches to opening challenging blocked arteries using minimally invasive techniques.