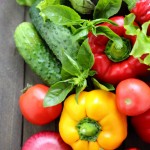 Organic food can be expensive. With living expenses through the roof, few people want to pay double or triple for their favorite foods. As a result, many health-conscious people eat organic selectively, focusing on specific foods.

And according to a new study, these efforts appear to be worthwhile. Eating organically – even occasionally – can help reduce your toxic burden.

The results were published in the journal Environmental Health Perspectives.

Eating Organic May Decrease Pesticide Levels by up to 65%

Over 4,400 participants were selected for the study. Data was collected from the Multi-Ethnic Study of Atherosclerosis. The purpose was to examine the relationship between organic food and pesticide exposure.

Researchers from Boise State University collected information on the types of produce eaten and the frequency in which organic foods were consumed. They also collected urine samples to measure the amount of organophosphate, the most common pesticide used in produce, which is also considered to be toxic by health experts.

The Boise study shows that eating organic occasionally is worth it. It also highlights the use of organophosphates, a pesticide that is found in the urine of 75% of the US population. Research links this pesticide to memory, attention, and developmental problems.

If you eat organic foods occasionally, you can minimize your pesticide exposure by limiting your intake of foods which are known for being heavily contaminated, or you may choose to buy these foods organic. These foods are popularly referred to as the “dirty dozen”.

Each year, the Environmental Working Group publishes a list with the most contaminated foods based on pesticide residue testing.