Grace O and some members of the FoodTrients team just returned from a whirlwind
trip to France where we met food writers and professionals from around the world, and discovered again how food is truly an international language that connects us all.

As one of Gourmand International’s “Best in the World” 2017 award winners for her AGE BEAUTIFULLY Cookbook, Grace and the team were invited to Paris, along with other winners from the past three years, to attend the Gourmand World Summit from March 20 – 22.

The 2019 Summit, which was held at UNESCO Headquarters, brought together the huge network of food culture professionals, around a big exhibition of 2000 books from 170 countries. It gave attendees the opportunity to see what is done and written around the world from Afghanistan to Zimbabwe. So many topics, styles, layouts, formats, angles, traditions, fusions and research were there to be discovered and shared. So many talented authors and creative publishers were there to be met.

This historical meeting of the Gourmand Awards winners was created for food writers and professionals to connect with some of the 1,500 attendees, which included ambassadors, publishers, authors, chefs, distributors, agents, photographers, food and tourism journalists, bloggers, and winemakers. 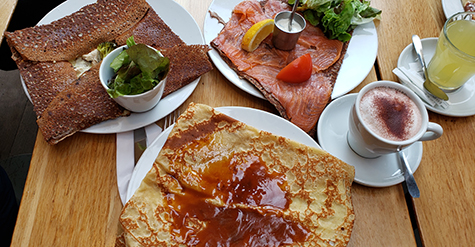 Summit attendees were also invited to attend the spectacular Village International de la Gastronomie and its big opening party. Located just in front of the Eiffel Tower, and very close to the UNESCO Headquarters, the Village brought together over 45,000 people and 60 countries with their best dishes and drinks. Grace and team boldly went from booth to booth getting a taste of global cuisines and meeting the proud chefs who presented their creations.

French regions were also very well represented through their iconic products and chefs. An intense program of events was held between the big show kitchens and the podium on the Seine River with musicians and dancers from all over the world. What a night of fun and “fullness!”

While in Paris and traveling around France and Belgium, we had a chance to go in search the best crepes, patés, French pastries and Belgium waffles.  All in all, it was a delicious adventure and, hopefully, we spread the word about FoodTrients around the world.

Bringing Together the Food Cultures of the World

Since 1995, the Gourmand World Cookbook Awards has brought together the best culinary books of the world. The competition is free, and open to every country, publisher or author, regardless of power or influence.

In 24 years, a huge network of professionals has been growing as over 1500 books are sent every year to participate, adding new members to this large family of food culture lovers.

That exponential growth allowed publishers, authors, TV producers, photographers, designers and winemakers to multiply their contacts around the world. The need of a professional summit was clear: fantastic texts and recipes from all over the world were available to be translated and adapted from one country to another.

The Paris Cookbook Fair was created in 2010, at Le Centquatre, a splendid cultural center in the east of the city. In 2013, the fair moved to the Carrousel du Louvre, before travelling to China in 2014, where the publishing industry was becoming more and more open to international content. In 2015, Gourmand International found an agreement with the Frankfurt Book Fair, the major cultural event of the world, to develop the Gourmet Gallery where publishers meet every year since then. In parallel, Gourmand co-organizes the food and drinks area of the Beijing International Book Fair.