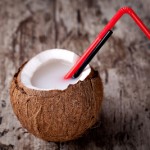 Judging by the number of coconut products in supermarkets these days –beyond the flaked coconut your granny used in macaroons and ambrosia –we’ve gone a bit nuts for this fruit.

That’s right: The hairy brown ovoid is not a true nut but the stone of a drupe, which makes it related to peaches and plums.

And depending on your coconut crush, there’s coconut tequila, vodka and beer, plus plain and flavored coconut waters based on the thin opaque juice found inside the fruit.

Of course, cooks in Asia, West Africa and the Caribbean have long used coconut milk (made by simmering coconut meat with water, then straining) and coconut oil (pressed from the meat) to enrich dishes in the same way cooks elsewhere might use cream or butter. Some newer products are coconut creatures of a different sort. Canned coconut milk used in a Thai curry, for example, is not the same as coconut milks found in grocery refrigerated cases.

Consider refrigerated cartons of coconut milk. “The coconut milk in the can is the one that tastes so delicious,” says registered dietitian Andrea Giancoli, a spokeswoman for the Academy of Nutrition and Dietetics. “You’re not going to get that deep coconutty flavor, taste and texture with refrigerated coconut milks.”

A look at the ingredient label will tell you why. “If you’ve never tried these coconut milks that are in the dairy case, it is not the same natural coconut milk that you … extract from the (meat of) the coconut, which is super high in fat, super high in calories–550 calories for 1 cup–and it’s very thick,” Giancoli says. “So what they’ve done with some of these coconut milks that are in the dairy section is they’ve watered them down a lot. So they have a lot fewer calories and a lot less fat.”

Still, Giancoli says the refrigerated milks work for smoothies and in cereals, and in “mashed sweet potatoes it would be divine.” And when she uses canned coconut milk in vegetable, meat and many traditional Asian dishes, she opts for the lower-calorie light version.

She’s a fan of coconut oil, spreading it on such fish as salmon or whitefish, so “as it cooks, it makes fish even moister.”

Solid at room temperature, coconut oil has a high smoking point that makes it good for frying and sauteing. “With coconut oil, you’re adding a really nice coconut flavor to your food,” adds the Los Angeles-based nutrition and health writer.

Those cultured coconut milk products similar to yogurts will add a “hint of coconut” layered with fruit into a parfait, she says. But don’t expect their nutrition to equal dairy products.

“Coconut, itself, is all fat with very, very little protein. So you’re not going to be getting naturally occurring carbohydrates or naturally occurring protein, or maybe a tiny, tiny bit of protein,” Giancoli says. Coconut milk and yogurt won’t supply the protein that regular or soy milk does.

“You also want to keep in mind that many of them have added sugars,” she says. Even versions labeled “plain” may have added sugar. “So you want to look for the unsweetened.”

Special diets, food allergies and a search for healthier fats have helped fuel interest in many of the coconut products in supermarkets these days. But it’s important to know what nutrition you’re getting and what you’re not.

“When you’re using these coconut products as substitutes for dairy products, you’re not going to get the same nutritional profile,” especially in the amounts of protein and calcium, says registered dietitian Andrea Giancoli, a spokeswoman for the Academy of Nutrition and Dietetics.

“Some of these coconut milks only have 10 percent of the daily value for calcium, whereas a glass of (dairy) milk is going to have 30 percent,” Giancoli says. “Choose a coconut milk or yogurt or whatever it is that has an excellent source of calcium–that is 20 percent or more.”

And keep tabs on added sugars, checking the ingredient labels on products like creamers and frozen desserts. “The frozen desserts, they have a lot of calories per half cup. Treat them as you would regular ice cream,” she says. “It’s not a license to go overboard on your frozen desserts.”

As for fat realities, when you eat coconut oil or a dairy-based butter or olive oil, “you’re basically getting the same amount of fat. And that means you’re getting a lot of calories,” she says. On the saturated fats in coconut itself and in coconut oil, “the jury’s really still out on whether it has any kind of definite health benefit,” she says.

“There are always foods that develop this health halo around them. And people tend to think that because it does have that health halo, that there are no calories or not any particular consequence from consuming loads and loads of that food,” Giancoli says. “We’re always looking for that one food that is going to let us eat to our hearts content and not have any consequences. Unfortunately, it doesn’t exist.”

Here are just a few coconut products that might find their way into your kitchen:

Coconut, dried: Can be sweetened or unsweetened. In flakes, shreds or chunks. Dessicated is a form of dried coconut.

Coconut spreads: Coconut oil is the primary ingredient; may contain other oils.

How fats stack up

Stir together 1 tablespoon olive oil, the lime juice, salt and pepper in a bowl. Add fish; toss to coat. Set aside.

Combine raisins and rum (or rum extract and water) in a small bowl; let soak, 15 minutes. In a large saucepan over high heat, combine water, rice, cinnamon stick and vanilla. Heat to a boil. Reduce heat to medium low; simmer, covered, until rice is tender and most of the liquid is absorbed, 20 minutes.