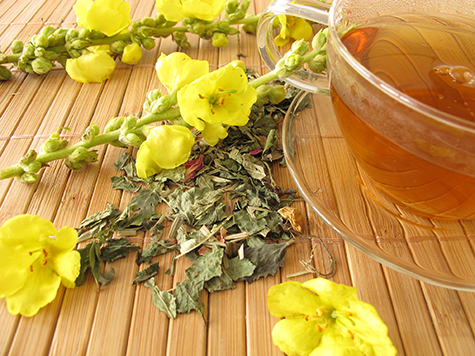 You may have seen the medicinal plant, mullein, growing along the side of the road, noticed it’s beautiful flowers and never known that it is, in fact, one of the oldest known medicinal plants. However, parts of this flowering plant have been used in traditional and folk medicine in many cultures for centuries for a variety of lung problems, gastrointestinal troubles, inflammation, skin conditions and migraines.

Mullein, officially Verbascum thapsus L. or Verbascum densiflorum, has been used medicinally since ancient times and its popularity has once again been increasing commercially for the past few years.

The part of mullein used for health includes dried leaves and flowers in capsules, alcohol extracts and flower oil. The use of common mullein extracts in folk medicine has begun recently to be supported by an increased interest and modern research. Though human clinical trials are lacking, research done in vitro (in a lab or petri dish) suggests that mullein taken orally may have efficacy for ear infections, the herpes virus and influenza. Compounds in this perennial are thought to have expectorant properties, hence the use in a variety of lung conditions. Note that mullein is used topically for wounds, burns, hemorrhoids, bruises, frostbite, and other skin conditions due to mucilaginous properties it contains. The leaves can be used topically to soften and protect the skin. 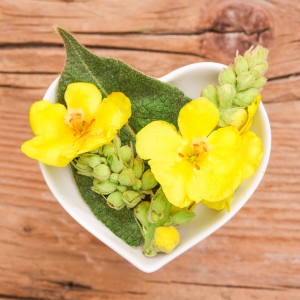 In vitro, or in the lab setting, mullein has shown some beneficial and promising properties. It has shown antimicrobial activity against types of harmful bacteria. Like so many other plants, it also contains antioxidant compounds. There is some hope that parts of this plant exhibit anti-tumor properties and it also acts as an antiviral. How the plant or its extracts will interact in the human body and what positive effect it may have are yet unknown. Dosing mullein is challenging because there are no existing reports about the toxicological effects so interactions with other herbs, medications or medical conditions is difficult to assess at this time.

Another challenge for understanding modern use of mullein is that, based on the available literature, there is no well-known standardization. There are also some worrisome claims that parts of the plant including the roots and seeds may contain a toxin called rotenone and liver toxic coumarins that is used as a pesticide though this has not been proven and whether the quantity in these plants is clinically significant is unknown. Though mullein has been used in ancient medicine, it’s modern use it yet unclear. If you are interested in using mullein, be sure to speak to your doctor or an herbalist who can help you learn more on how to use it safety.

What do you think? Let us know in the comments if you have had a positive experience using mullein!