Men Who Eat Soy May Have Lower Lung Cancer Risk 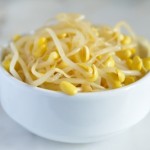 Men who do not smoke and eat a lot of soy may have a lower risk of lung cancer, according to a new study.

Soy contains is flavones, which act similarly to the hormone estrogens, and may have anticancer qualities in hormonerelated cancers of the breast and prostate, BBC health reported.

Cells in the lung have properties that suggest they may also respond to is flavones. Researchers studied more than 36,000 men and more than 40,000 women, 45 to 74 years old and free of cancer at the start of the study.

The researchers followed the women for about 11 years, after surveying their food intake, smoking status, medical history, and other lifestyle factors between 1995 and 1999.

After taking a number of factors into account, the risk about halved in the highest versus the lowest intake group. There were even fewer lung cancer cases among women, so researchers could draw no conclusions about their risks.