The Many Splendors & Benefits of Dill 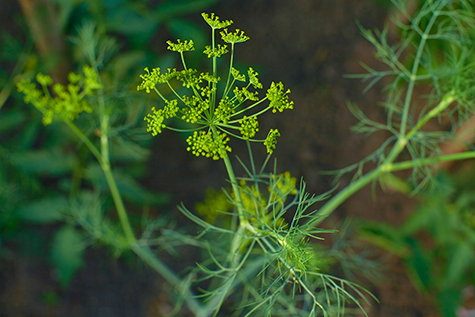 You may have a nutritional and culinary gift growing in your garden right now; dill weed. Dill (anethum graveolens) can be used beyond flavoring pickles, a common preparation. This herb is used in cuisines around the world and also has some fascinating potential health benefits when used medicinally. Native to the Mediterranean and Russia, dill seeds and leaves are used as a spice to flavor foods. Used in traditional medicine, dill is known for calming the digestive tract and has been used since ancient times. It is especially popular in Ayurvedic medicine of India.

Medicinally, dill is used to treat: 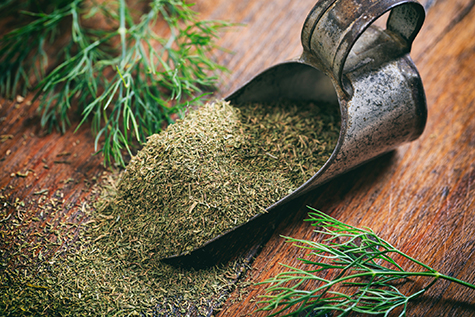 Dill in the kitchen:

Dill is on the generally recognized as safe list (GRAS) when eaten in normal amounts in food. Feel free to use it freely in recipes if you like the flavor. When eaten, it has some beneficial nutrients including calcium, iron, magnesium, potassium and zinc. It also contains vitamin C, Vitamin A and a number of B-vitamins. Like so many herbs, dill contains powerful antioxidants which are likely responsible for its potential health benefits. Carvone, limonene, dill ether, phellandrene and myristicin are just a few potential beneficial components of dill. Fresh dill contains the largest amount of antioxidant phenolic acids in comparison to other preparations so gathering it from your own garden or picking it up fresh at a farmer’s market could be your best option for nutritional benefit.

Dill can be added to dips, soups, to flavor fish and poultry, as a garnish and flavor on salads or in dressings, to brighten up vegetable dishes, on pasta – especially with cream or lemon sauce – in potato or egg salad, in sandwiches and in egg dishes. Get creative with a “pickle” flavored dessert using dill or garnishing your water or a cocktail with this herb. 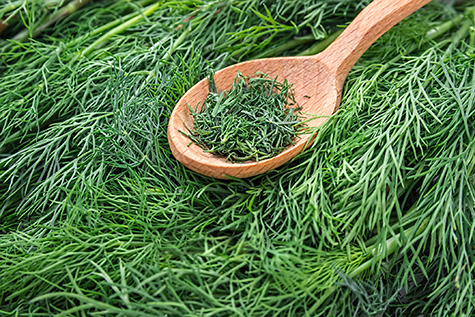 More studies need to be done on dill as a medicinal herb but there is some evidence that it could help lower cholesterol – especially ‘bad’ cholesterol/LDL. In a human study, participants took dill in 650 mg capsules twice daily for 6 weeks but outcomes were mixed and some people did not experience a benefit. Other studies suggest that taking dill as a tea could help reduce flatulence and act as a digestive aid. Consuming herbs in tea form are always less concentrated and potentially safer than taking them in supplement form.

As always, there are some safety considerations with dill – especially when used in supplement form which is more concentrated that what would be consumed in food. It’s actually not safe during pregnancy or lactation as it hasn’t been studied well and could stimulate menstrual flow in an undesirable way. There could be a moderate interaction with dill supplements taken at the same time as diabetes medications or lithium so if you’re on those types of medicines, be sure to speak with your doctor and pharmacist. Dill is in the carrot family so if you’re allergic to celery, caraway, coriander or fennel, use caution with dill as well.

Do you enjoy the flavor of dill? Have you used it medicinally? How do you like to cook with it? Let us know in the comments!