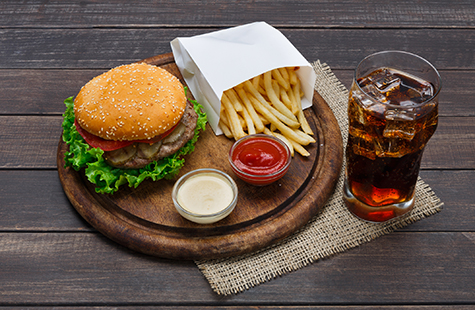 An article appearing on January 18, 2018 in JAMA Oncology reports an association between the consumption of a proinflammatory diet, characterized by an increased intake of meat, refined grains and high-calorie beverages, with a greater risk of developing colorectal cancer during up to 26 years of follow-up.

The research included 46,804 men who participated in the Health Professionals Follow-up Study from 1986-2012 and 74,246 women enrolled in the Nurses’ Health Study from 1984-2012. Questionnaires completed at the beginning of the studies and every two years thereafter were used to collect medical, lifestyle and other information. Food frequency questionnaires completed upon enrollment and at every 4 years provided dietary data that was scored for overall inflammatory potential based on the intake of 18 food groups.

During 24 years of follow-up, 1,258 cases of colorectal cancer were diagnosed in men, and among women 1,441 cases developed during a 26-year follow-up period. Men whose empirical dietary inflammatory pattern (EDIP) score was among the top 20% of subjects had a 44% greater risk of developing colorectal cancer compared to those whose scores were among the lowest 20%. For women whose scores were among the top group, the risk was 22% greater. The risk appeared to be higher in overweight or obese men, lean women, and subjects who did not consume alcohol.