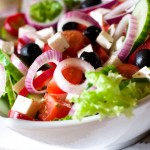 A study reported online on March 19, 2014 in the Journal of Nutrition links higher intake of vitamin K with a lower risk of dying from any cause over a median follow-up of 4.8 years.

The study included 7,216 participants in the PREDIMED study, which sought to evaluate the protective effect of a Mediterranean diet against the risk of cardiovascular disease in older men and women. Annual dietary questionnaire responses completed by the participants were analyzed for the intake of phylloquinone (vitamin K1) and menaquinone (vitamin K2). Over a 4.8 year median, there were 323 deaths, including 81 deaths from cardiovascular disease and 130 cancer deaths.

“To our knowledge, this is the first study to evaluate the specific association of both active forms of vitamin K (vitamins K-1 and K-2), and their changes during the follow-up, with cancer mortality, cardiovascular mortality, or all-cause mortality in a prospective longitudinal study of Mediterranean individuals at high cardiovascular disease risk and using repeated measurements of dietary intake,” the authors announce. “The results of the present study show, for the first time, an inverse association between an increased intake of both dietary phylloquinone and menaquinone, and cancer mortality or all-cause mortality.”