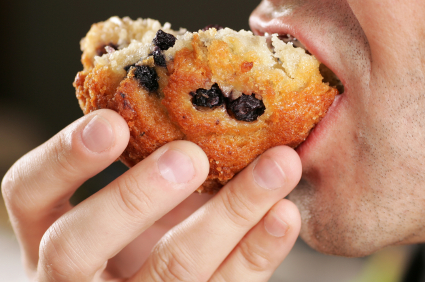 Food was cathartic for Max Sala, something that held his life together and at the same time tore it apart.

As a child he ate for comfort, arriving for his freshman year of high school, as he put it, “significantly overweight.”

Then Sala, now 19 and a student at the University of California at Davis, started losing weight and couldn’t stop. Sometimes he would go days without eating. Other days he would ravage his family kitchen in the middle of the night, gorging himself, and then purge. Purging, he said, was “like a breath of fresh air.”

To this day, Sala still struggles with an eating disorder, a subtype of anorexia that includes binging and purging.

Men like Sala account for a far larger portion of eating disorders than clinicians realized even a decade ago. One recent Canadian study suggested as many as one in three cases of anorexia are male, while past estimates have hovered around one in nine. A 2007 Harvard study found nearly a quarter of study participants with anorexia and bulimia were male, around double traditional estimates. In that study, 40 percent of those with binge eating disorder were male.

In the 17th century, one of the first medical descriptions of anorexia included case studies of both a man and a woman, but recent history has largely cast eating disorders as a female affliction.

“If we continue to act as though eating disorders do not occur in men, we are missing a vast population of need,” said Athena Robinson, a Stanford psychologist who studies eating disorders in both sexes.

Most researchers and clinicians generally agree that eating disorders occur at a higher rate among women, but viewing disorders as an exclusively female issue has serious consequences, say those who study male disorders.

Ignoring the prevalence of disorders among men creates a stigma that may prevent them from seeking help and a bias that might prevent clinicians or family members from recognizing a disorder in men, resulting in more of those men slipping under the radar.

Researchers say the societal pressures on men to look a certain way — lean and muscular like the leading men of advertising, cinema and sports — are akin to those on women. But stigma and gender bias makes diagnosing male eating disorders difficult; a guy who spends hours at the gym perfecting his physique, for example, is viewed as normal.

“Even males with eating disorders think of anorexia as a female problem in which the main goal is to be thinner,” said Alison Darcy , a psychiatry research associate at Stanford who has been among those leading a charge to gain greater recognition for male disorders.

Sala believes his eating disorder was in part rooted in the teasing he suffered as a boy over his weight. Transitioning to high school was another source of anxiety and stress.

He channeled those feelings into a “disparagement” of his own body, as he put it. Being thin — and purging — became a comforting addiction. As a teen, he was in and out of treatment centers, though it was often difficult to find one that treated men.

“Some of the findings have been quite surprising,” she said. For example, many “boys didn’t endorse a desire to lose weight,” but instead desired to build up lean, muscular figures. They seemed more likely to focus in on specific parts of their body. Of course, for some, like Sala, thinness is a desire, too.

Darcy’s findings indicated that boys are more likely to point to a specific life event as a cause for their disorder, like the beginning of high school for Sala. Bullying and the pressures of athleticism are also major factors.

A major frustration, said Darcy, is that eating disorder research is gender-biased, with many studies still focusing exclusively on women and girls.

“We’re missing a vital opportunity to understand disorders in males,” she said.

Ken McCraney , 64, of San Jose, has been battling an eating disorder for decades. Anorexia set in during his early 20s; he still struggles to explain why. He recalled always having a “fear of fat.” When his wife lost her job, though, that turned not eating into an obsession. He heavily restricted calories, some days not eating anything at all.

“Once I started not eating, it became hard to eat,” he said. “Anorexia is like a narcotic. You just get so caught up in it.”

In his 30s he started seeing a therapist, but it wasn’t until 2010 that he said he really got serious about seeking help. His body was shutting down: he had suffered kidney stones, liver troubles, sleeping issues, seizures and lost all of his teeth all due to malnourishment.

At a residential treatment center, though, he often had trouble connecting with other patients. Not only did the treatment seem geared toward young women, he was the sole man in the eating disorder program. Most other patients were young women “barely out of their teens.”

McCraney’s body is permanently damaged from his disorder. When he does eat — which is still a mental struggle — his body can now only handle eating the blandest of foods.

“It can happen to all kinds of people,” he said. “Not just young women.”

For Sala, help came much earlier in life. His mom recognized there was an issue right away. He was in and out of treatment centers and therapy throughout high school with varying degrees of relapse and success. As a senior in high school, things started to get a little better, but the stress of his freshman year of college made them get even worse.

He missed a chunk of his freshman year while at a residential treatment center in Wisconsin and he spent the summer in other programs locally.

Now in his second year of college, he hopes to become a psychiatrist and focus on adult eating disorders.

It’s been several months since he binged or purged. It’s still a day-to-day struggle, he said. He sees a therapist regularly, thinks a lot about his body and slowly realized that the disorder wasn’t really fulfilling.

Finally, he said, he understands “food is not the enemy. It’s what we do with it.”