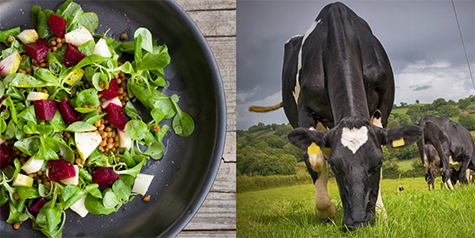 Industrial meat production is a leading cause of global warming, yet a plant-based diet alone might not solve the problem—or could it? What’s the way forward on this contentious debate? We put the challenge to two of our senior editors, Bill “Reg” Giebler and Jenna “Veg” Blumenfeld. Here’s what they had to say to one another.

Bill Giebler: As we explore the ethics of meat eating, I look to the history of humanity. Eating animals was the hunter part that accompanied the gatherer; therefore, as cultivation became the norm for food production some ten thousand years ago, animal management was a logical component of this. Over the past century, all agriculture has undergone dramatic intensification, resulting in extractive and toxic outcomes. This is true for corn and swine, for tomatoes and bovines. The question arises: should we stop consuming these things that we produce in a destructive manner? The answer for me is a clear no. We must, however, stop the destruction—and do everything we can to reverse it.

Jenna Blumenfeld: The growth of regenerative agriculture is a boon for our industry and for the environment, and raising animals for food and growing produce, grains, legumes, nuts and seeds in a manner that returns nutrients and carbon to the soil is a commendable task. But the environment is crumbling around us. A United Nations report published earlier this month found that crisis as a result of climate change won’t hit us in 100 years. Nor 50 years. But in 22 years. As early as 2040.

Raising ruminants is a massive contributor to greenhouse gases. And considering that beef consumption, according to the World Resources Institute, is on track to increase by more than 80 percent globally by the year 2050, reducing the amount of meat you eat is the best—and fastest, easiest and cheapest—way to help mitigate the rapid warming of our planet.

I agree with your recommended reduction of CAFO meat. I’d add a reduction of mono-cropped grains and conventionally produced fruits and vegetables (and coal power and single passenger internal combustion engine commutes). These consumer actions are important. What’s also important is to not mistake the resource for the problem: Electricity doesn’t cause global warming, short-sighted methods of electrical production do. We need not boycott electricity, but let’s rapidly transition to production methods that aren’t destructive. The same is true for tortilla chips and bread and tomatoes and, of course, beef. 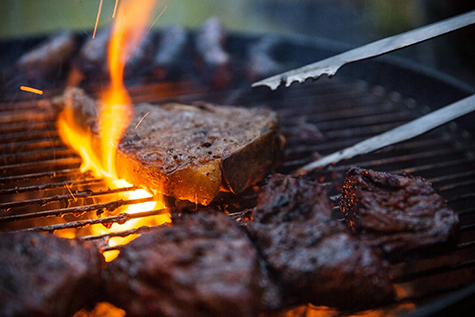 JB: You’re forgetting about reality, Bill. It’s wonderful that more ranchers are transitioning to Savory’s model. In fact, it’s inspiring. And increasingly more consumers are understanding that factory-farmed beef is a harmful thing to consume—if not for the environment than at the very least for health and ethics (which, for the sake of everyone reading this, I won’t even get into). If you’re going to eat meat, regeneratively raised animals are undoubtedly the way to go. But the fact remains: Regeneratively raised meat is simply not attainable for most people. It’s significantly more expensive than CAFO meat, as it should be. If consumers had enough self-discipline to eat regenerative meat all the time, then I may start to agree with you and your fairyland dreams.

But people don’t think like that. That’s why fast food exists. Even many natural consumers who are encouraged to eat lots of meat by popular diets such as the paleo, Whole30 and keto diets—people who do care about where their food comes from—likely can’t consistently afford regenerative beef. Perhaps they can’t even afford grassfed. Given its lack of availability, affordability and accessibility, arguing for more people to eat more plants over eating top-tier, elf-blessed meat will lead to improved environmental gains. A vegetarian diet is more attainable, and thus more impactful.

BG: But is it attainable? To assume that a nation could give up beef when it’s famously “what’s for dinner,” sounds like fantasy as well, and after a couple thousand years of vegetarianism, a very small number of people subscribe to it. We need them, but we need other options, too.

It’s a good point, though, to bring this conversation down to reality. Is it in reach for everyone to give up meat? It doesn’t appear to be. Is eating only holistically managed 100 percent grassfed beef attainable? Not yet. Are each of these things attainable for certain individuals. Yes! This is how organic agriculture came to be. It identified that the problem with toxic agriculture wasn’t the crop (no veggie boycott necessary!) it was the methodology. And despite the concern that it was expensively undemocratic, the organic industry pushed onward. This same transition is necessary for meat.

As Standard Soil CEO Russ Conser coined, “it’s not the COW, it’s the HOW.” Let’s not vilify beef. Let’s invest—as consumers, as brands, as producers—in beef production that is regenerative, because regeneration may not be possible without it. And let’s not rely on genetically engineered fake meats, and not even on plant-based protein sources whose production is based in biocides and toxic fertilizer overruns that harm wildlife and suffocate waterways (yes, the ethical question of killing animals to produce food is raised in an Iowa soy field as well as a North Carolina pig farm.)

We share the wish that consumers shop and eat differently in significant volumes on a rapid enough timeline to save, as you say, the crumbling environment. We even share the specific wish that people might stop eating factory-farmed meat. But to blame the cow drives divisiveness between two groups eager to reverse global warming.

For me, it’s this: As we attempt to solve the crises humans have created in the natural world, I’m most inspired when we do so with the beauty, richness and fecundity of the natural world as our guide. Biological systems consist of plants and animals co-creating, they reveal complex collaborations, they embrace death and rebirth and the interconnectedness of everything. The floral and faunal interplay that comprises holistic management has biomimicry at its root, and therefore has infinite promise in reestablishing harmony in our food systems.

So please, vegetarians, continue to criticize CAFO meat, but never forget to include the qualifier, because to condemn “meat” as though that has a singular meaning perpetuates misinformation and misunderstanding.

JB: The discussion is not whether regeneratively raised beef is better than CAFO meat. Of course it is. Nor is it whether we should halt the quest for rebuilding our prairie grasslands through holistic land management. Of course we shouldn’t. 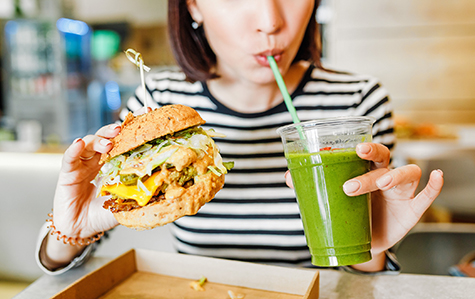 The keystone issue here is exploring how our eating habits can mitigate climate change through the reduction of greenhouse gases such as methane and carbon dioxide. Regenerative ag has carbon sequestration benefits, for sure. But according to Project Drawdown, a rigorously researched list of plausible solutions that could reverse global warming, eating a plant-rich diet ranks fourth out of 80 solutions, behind reducing refrigerants, wind energy and stemming food waste. Regenerative agriculture? It ranks 11th. “Business-as-usual emissions could be reduced by as much as 70 percent through adopting a vegan diet and 63 percent for a vegetarian diet, which includes cheese, milk, and eggs,” reports Project Drawdown, citing a 2016 study published by the Proceedings of the National Academy of Sciences. These are solidly convincing numbers that shouldn’t be ignored.

I assume those fake meats and plant-based protein sources you mention are from companies including Just, Beyond Meat, Impossible Burger, Good Catch and many more. They play an integral role in ushering consumers toward eating less CAFO meat. They’re delicious. They’re price competitive. And in many cases, they’re even merchandised next to the animal-based meat, making it attainable for everyone—my deer-huntin’, meat-lovin’, vegetarian-scoffin’ uncle included—to reduce their consumption of animal products. Meat alternatives are stepping stones to a less carbon-intensive diet: Today it’s a Beyond Burger; tomorrow it’s an organic tofu Buddha bowl.