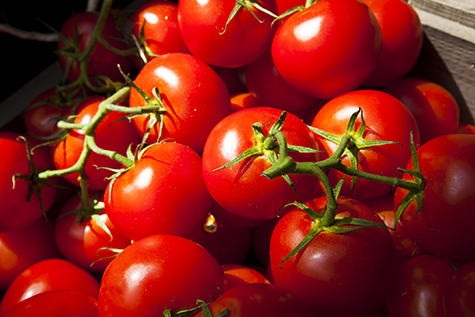 An article that appeared online on July 11, 2017 in Scientific Reports reveals a protective effect for consuming tomatoes against the development of skin tumors. “To our knowledge, this is the first study investigating the effects of tomato consumption on keratinocyte carcinomas in vivo,” authors Jessica L. Cooperstone and colleagues announce.

Researchers at Ohio State University fed hairless mice a growth-enhancing rodent diet that did not contain tomatoes or carotenoids, or a 10% tangerine tomato or red tomato powder diet for 35 weeks. (The lycopene in tangerine tomatoes, while significantly lower in quantity, has greater bioavailability than that of than red tomatoes.) From the 11th to 20th week, two-thirds of the animals were exposed to ultraviolet-B light three times weekly.

At the end of the study, the number of tumors in male mice that received diets that contained tomatoes or red tomatoes was, on average, half that of male mice on the control diet. While those that received tangerine tomatoes had fewer tumors than animals that received no tomatoes, the difference was not considered significant.

“This study showed us that we do need to consider sex when exploring different preventive strategies,” remarked senior author Tatiana Oberyszyn, who is a member of Ohio State’s Comprehensive Cancer Center. “What works in men may not always work equally well in women and vice versa.”

Clinical trial results suggest that consuming tomatoes can reduce sunburn, which may be due to tomato’s carotenoids that deposit in the skin and protect against ultraviolet light damage. “Alternative methods for systemic protection, possibly through nutritional interventions to modulate risk for skin-related diseases, could provide a significant benefit,” Dr Cooperstone observed. “Foods are not drugs, but they can possibly, over the lifetime of consumption, alter the development of certain diseases.”