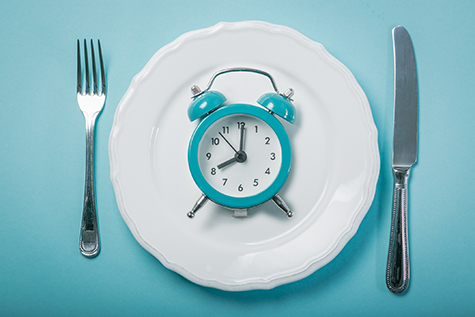 A pilot study conducted at LSU’s Pennington Biomedical Research Center shows that eating all your meals by midafternoon and fasting the rest of the day improves blood sugar control, blood pressure and oxidative stress, even when people don’t change what they eat.

“Ours is the first study in humans that shows consuming all of your calories in a six-hour period provides metabolic advantages compared to eating the exact same amount over 12 hours or more, even if you don’t lose weight,” said study co-author Dr. Eric Ravussin, Pennington’s associate executive director and director of the Nutrition Obesity Research Center. “Our data also indicate that our feeding regimen has to be synchronized with the body’s circadian rhythm and our biological clock.”

Dr. Courtney Peterson, primary investigator on the study, said she hopes the research also will raise awareness of the role of the body’s internal biological clock — called the circadian system — in health.

“If you eat late at night, it’s bad for your metabolism,” Peterson said. “Our bodies are optimized to do certain things at certain times of the day, and eating in sync with our circadian rhythms seems to improve our health in multiple ways. For instance, our body’s ability to keep our blood sugar under control is better in the morning than it is in the afternoon and the evening, so it makes sense to eat most of our food in the morning and early afternoon.”

In the Pennington study, eight men with prediabetes followed both the intermittent fasting diet and eating at typical American meal times for five weeks each.

On the restricted schedule, the men each started breakfast between 6:30 a.m. and 8:30 a.m. and finished eating for the day six hours later. They then fasted for the rest of the day — about 18 hours. Everyone finished dinner no later than 3 p.m.

By contrast, on the typical American schedule, the men ate their meals spread across a 12-hour period. They ate the same foods on each schedule, and the researchers carefully monitored them to make sure that they ate at the correct times and only ate the food that the researchers gave them.

The researchers found that the fasting diet improved insulin sensitivity, which reflects how quickly cells can take up blood sugar, and it also improved the ability of the men’s pancreases to respond to rising blood sugar levels. The researchers also found that the blood pressure of the men was dramatically lowered, as well as their oxidative stress levels and their appetite levels in the evening.

These findings, the researches said, could lead to better ways to help prevent type 2 diabetes and hypertension.

In light of these promising results, Peterson said more research is needed on intermittent fasting and meal timing to find out how they affect health and to figure out what types of approaches are doable for most people.

Ravussin is a world-renowned expert in the conduct of translational research in obesity and type 2 diabetes. Over his more than 30-year career, he has conducted numerous clinical investigations on measures of energy expenditure, body composition, carbohydrate metabolism and biomarkers of aging in health and disease states.