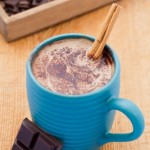 “A study in the journal Hypertension found elderly people with mild cognitive impairment given dietary flavanols from chocolate did better on cognition tests,” Phil Lempert, a food industry analyst, trend watcher and creator of supermarketguru.com, said in a statement. “They also experienced a decrease in insulin resistance, which helps regulate blood sugar, as well as improvements in blood pressure, compared with those who consumed only small amounts.”

Flavanols are a type of flavonoid — the phytochemical associated with the many health benefits of cocoa, Lempert said.

A variety of research projects demonstrate cocoa’s health benefits but it’s important to understand that not all chocolate products are the same, Lempert said.

“All chocolate contains some flavonoids, but it is important to choose minimally processed dark chocolate with a cacao content upwards of 70 percent,” Lempert said. “The higher the cocoa percentage, the more flavanols and antioxidants it contains. You can also purchase cacao or cocoa powder that can be used in a variety of ways.”