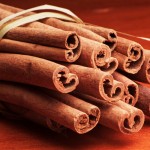 The trial included fifty men and women between the ages of 20 and 65 years with NAFLD. Participants were randomized to receive two 750 milligram capsules of cinnamon or a placebo daily for twelve weeks. Blood samples collected before and after the treatment period were analyzed for fasting blood glucose, lipids, liver enzymes and C-reactive protein, a marker of inflammation.

“Although the effects of cinnamon on diabetes and its related blood parameters and lipid profile have been studied in several trials with conflicting results, to our knowledge, this is the first study indicating the therapeutic effects of cinnamon on NAFLD characteristics,” authors Faezeh Askari and colleagues announce. “Since insulin resistance, oxidative stress, lipid peroxidation, and subsequent reactive oxygen species are among the major known mechanisms in the development of NAFLD and NASH, it is possible that cinnamon may have beneficial effects in the treatment of NAFLD too.”

“This study has shown that 1.5 g of cinnamon supplementation for 12 weeks improved NAFLD characteristics and could be a good adjuvant therapeutic option for this disease,” they conclude.