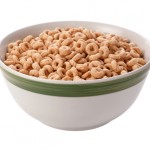 This decision is said by General Mills to be years in the making and a reaction to as much as 30% of Americans avoiding gluten in their diets.

What grains are Cheerios made from, anyway? How will they be made now? And why did it take General Mills three years to make this change? We’ve got the scoop for you as well as an awesome video from General Mills, announcing the news!

So What Grain are Cheerios Made from, Anyway?

Cheerios products are actually made from Oats! While oats are naturally gluten-free, they are often contaminated by other grains such as wheat and barley during the growing and transport process. The only Cheerios product that requires an actual recipe change is Multi-Grain, as it contains barley and wheat. General Mills has changed this recipe entirely to be completely gluten-free!

How Did General Mills Do It?

The company has spent the past 3 years developing a mechanical filter to take out the gluten grains at their facilities. After rigorous testing, they have perfected the filtering process, ensuring that the oats used for Cheerios meet FDA’s strict gluten-free guidelines.

General Mills decided to make the switch after successfully boosting sales of Chex cereal by changing the recipe to gluten-free in 2010. “People are actually walking away from cereal because they’re avoiding gluten,” commented Jim Murphy, president of the ready-to-eat cereal division of General Mills. “At a time when cereal sales, including Cheerios, are weak, we just can’t afford that.”

Gluten-Free Cheerios, available this July, will be clearly labeled. Thanks for looking out for us, Cheerios! We couldn’t be more excited!

Check out this video announcing the switch to gluten-free: