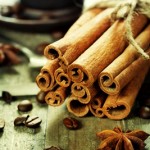 Of all the problems that can come along with aging, the loss of mental function is often feared the most, for good reason. For many of us, a gradual decline in physical abilities seems somewhat acceptable, but a disease that threatens our memories and ability to recognize familiar faces is another story altogether.

With Alzheimer’s disease, brain cell to brain cell connections are lost due to abnormal protein deposits that form in your brain’s extra-cellular matrix. These connections normally serve as “information highways” for learning, memory development and recall. Without them, our ability to think and remember suffers incredibly.

Amazingly enough, compounds in cinnamon may actually offer hope as a future prevention and treatment strategy for Alzheimer’s disease by warding off these abnormal protein deposits and preserving brain cell connections. Pretty interesting, isn’t it?

Watch the short video below for a great explanation from Dr. Michael Smith: