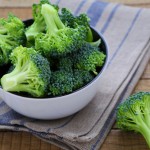 Findings from research reported at the American Association for Cancer Research Annual Meeting in Philadelphia reveal a protective effect for an extract of broccoli sprouts against oral cancer. The sprouts are high in sulforaphane, a compound that occurs in broccoli and other cruciferous vegetables whose intake has been associated with protection against environmental carcinogens and several cancers.

Acting on positive findings in mice predisposed to the disease, Julie Bauman, MD, MPH, and her associates at the University of Pittsburgh Cancer Institute tested the effect of broccoli sprout extract in ten healthy human volunteers. The extract was well tolerated and was associated with protective changes in the lining of the subjects’ mouths, indicating it was well-absorbed and directed to at-risk tissue. These preliminary studies are the basis for a clinical trial that will be conducted next year, which will involve 40 participants successfully treated for head and neck cancer who will be given broccoli seed powder capsules.

“People who are cured of head and neck cancer are still at very high risk for a second cancer in their mouth or throat, and, unfortunately, these second cancers are commonly fatal,” noted Dr Bauman, who is codirector of the University of Pittsburgh Medical Center Head and Neck Cancer Center of Excellence. “So we’re developing a safe, natural molecule found in cruciferous vegetables to protect the oral lining where these cancers form.”

“We call this ‘green chemoprevention,’ where simple seed preparations or plant extracts are used to prevent disease,” added Dr Bauman, who is also an associate professor at the University of Pittsburg School of Medicine. “Green chemoprevention requires less money and fewer resources than a traditional pharmaceutical study, and could be more easily disseminated in developing countries where head and neck cancer is a significant problem.”