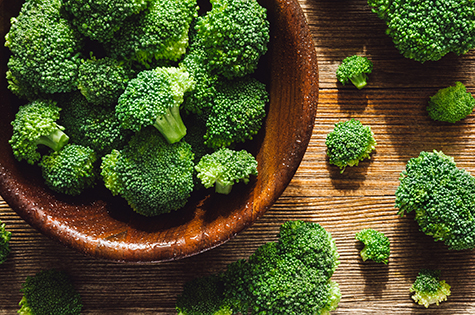 An article appearing on August 14, 2018 in the journal Immunity suggests a role for broccoli and other vegetables belonging to the Brassica genus in helping to maintain intestinal health and prevent colon cancer.

When these vegetables are consumed, a compound known as indole-3-carbinol (I3C) is formed, which activates the aryl hydrocarbon receptor (AhR) protein that carries signals to immune cells and epithelial cells. Researchers Amina Metidji of the Francis Crick Institute and colleagues determined that this protein is important for repairing damage to the epithelial cells that line the intestinal tract.

“We studied genetically modified mice that cannot produce or activate AhR in their guts and found that they readily developed gut inflammation which progressed to colon cancer,” Dr Metidji explained. “However, when we fed them a diet enriched with I3C, they did not develop inflammation or cancer. Interestingly, when mice whose cancer was already developing were switched to the I3C-enriched diet, they ended up with significantly fewer tumors which were also more benign.”

“Seeing the profound effect of diet on gut inflammation and colon cancer was very striking,” commented senior author Gitta Stockinger. “We often think of colon cancer as a disease promoted by a Western diet rich in fat and poor in vegetable content, and our results suggest a mechanism behind this observation. Many vegetables produce chemicals that keep AhR stimulated in the gut. We found that AhR-promoting chemicals in the diet can correct defects caused by insufficient AhR stimulation. This can restore epithelial cell differentiation, offering resistance to intestinal infections and preventing colon cancer.”

“Now that we’ve demonstrated the mechanistic basis for this in mice, we’re going to investigate these effects in human cells and people,” Dr Gitta added. “In the meantime, there’s certainly no harm in eating more vegetables!”