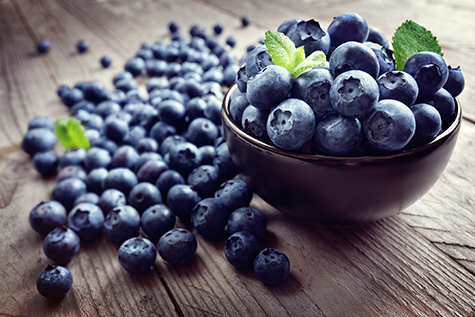 Until recently, the majority of scientific research on blueberries has focused on the cognitive benefits of this fruit. Multiple studies have shown that blueberries slow age-related damage to brain cells and protect memory-associated brain regions from oxidant and inflammatory damage. The result is improvements in overall cognitive function.

Researchers have uncovered new data showing that blueberries delay aging and promote longevity. In laboratory experiments, blueberries and their extracts have extended the life span in two different models of aging. Additionally, blueberries have been shown to fight DNA damage, metabolic syndrome, heart disease, and even cancer.

Rich in anthocyanins and pterostilbenes, blueberries are becoming a critical component of a science-based longevity program.

In studying longevity benefits of various compounds, scientists often use fruit flies as a laboratory model of aging. What researchers discovered is that fruit flies live 10% longer when fed a regular diet containing blueberry extract. Not only do the fruit flies live longer but they also show improved levels of physical activity. These enhancements arise both from increased tolerance of oxidant stress and from beneficial changes in the way certain important genes are expressed.

Still more dramatic life span extension has been shown in another aging model called C. elegans. After supplementation with blueberry extract, these organisms lived an average of 28% longer, and the maximum life span increased by 14%. The supplemented animals showed a 20% reduction in an age-related protein that impairs function, and vastly improved tolerance of stress in their environment.

Mammals experience increased longevity and slowed aging processes when fed blueberry extracts, as shown by a study of mice on calorie restriction. When calorie-restricted mice had blueberry extracts added to their food ration, they not only outlived the normally-fed mice, but also the calorie-restricted mice who were not given the supplement as well.

In addition to extending the life span of whole organisms, blueberries and their extracts slow aging in individual tissues, providing wide physiological benefits. Along with increasing all around longevity, blueberries can specifically decrease the risk of various degenerative diseases that reduce the human life spans.

Americans have enjoyed a steady rise in life expectancy for more than two centuries, but that is likely to change, due to the spiraling increase in obesity rates. If we don’t change our ways, average life span may decrease by 5 years or more, say members of an expert panel convened by the National Institute on Aging.

Blueberry extracts have many positive effects that may help you lose weight and keep it off. Studies show that animals fed blueberry extracts while on a high-fat diet had lower overall weight gain, and smaller accumulations of body fat, than control animals.

Importantly, the loss of body fat is especially prominent in the abdominal areas and the liver; fat in those areas poses the greatest risk of cardiovascular disease and other life-shortening complications of obesity.

Some of blueberries’ anti-obesity benefits come from their ability to block enzymes in the intestines that promote carbohydrate absorption. Once absorbed into the body, blueberry flavonoids slow the rate at which fat cells develop and multiply, and decrease the amount of fat stored by each cell. Blueberry extracts promote sugar uptake into muscle cells, where it can be used as energy, rather than being stored as fat. Finally, blueberry extracts suppress the inflammation and other unfavorable biochemical effects produced by fat tissue.

Avoid the Metabolic Syndrome and Diabetes

Obesity is the central component of metabolic syndrome, which includes insulin resistance (pre-diabetes), high blood pressure, and elevated blood lipid and cholesterol levels. Metabolic syndrome kills early: people younger than age 65 who have it are 35% more likely to die from all causes, and 78% more likely to die from cardiovascular causes, than those who have avoided the syndrome.

Blueberry extracts offer hope at many levels, combating the components of metabolic syndrome. Here’s how:

Blueberries’ blood pressure-lowering effects are the result of multiple mechanisms of action. Blueberries help blood vessels to relax, reducing the resistance to blood flow that produces high pressure (think of your finger on the end of a garden hose). And blueberry extracts inhibit a protein called angiotensin converting enzyme (ACE) that your body uses to keep blood pressure elevated; prescription drugs such as enalapril and lisinopril work in the same way, but have side effects.

Blueberry extracts reduce blood levels of total and low-density lipoprotein (LDL) cholesterol; research shows this reduction can be as much as 12% and 15%, respectively. Triglyceride levels, (a potentially dangerous form of fat in the body), are lowered in the blood of blueberry-supplemented animals. Supplemented animals on a high-fat diet showed reduced triglyceride accumulation in the liver, one of the hallmarks of the metabolic syndrome. In one particularly compelling study, animals fed a very high-fat diet (60% of calories from fat) had marked elevations in serum cholesterol and triglyceride levels, but those levels were decreased to normal when blueberry extracts were added to the diet. Blueberry extracts reduce cholesterol production in the liver, and enhance excretion of cholesterol in the feces.

Blueberries enhance exercise effects. Regular moderate exercise is one of the most important ways for you to combat metabolic syndrome. Most people, however, fall far short of getting sufficient exercise. Blueberries reduce the oxidant stress of exercise, which in turn can limit the duration and intensity of your workouts. Blueberry extracts prevent exercise-induced muscle damage that can leave you sore and aching and disinterested in future workouts. And supplementing with blueberry extracts adds to the immune-system boost that regular workouts can provide, helping to keep you vigorous both inside and out.

Reduce Your Risk of Cardiovascular Disease

Heart disease is the number one killer of Americans, affecting more than 27 million and causing nearly 600,000 deaths annually. Blueberries can combat heart disease by reducing your likelihood of developing major risk factors such as obesity, diabetes, lipid disorders, and the metabolic syndrome. They directly address some of the major biological changes in your body that lead to atherosclerosis, or “hardening of the arteries.”

Blueberry extracts help your blood vessels regulate themselves by tightening up or relaxing in response to blood flow. Loss of this control is an early feature of atherosclerosis; left unchecked, it produces undesirable thickening (“hardening”) of arterial walls and a reduction in blood flow to vital tissues that ultimately produces a heart attack or stroke.

Blueberry extracts fight the oxidation of fat that triggers inflammation, eventually leading to cholesterol-filled inflammatory plaques and thickening of the muscular layer of your arteries. When those plaques break loose, they can abruptly block an artery, triggering an infarction (tissue death from loss of blood flow). Blueberry-treated animals subjected to experimentally-induced heart attacks are partially protected from heart muscle injury; when such injury does occur they show significantly smaller areas of heart muscle damage than control animals.

Survivors of heart attacks often face seemingly permanent loss of function and exercise tolerance, the result of a weakened heart muscle commonly known as heart failure. That can lead to premature death. Blueberry extracts can strengthen heart muscle contractions and boost the heart’s ability to pump blood effectively, even after a heart-failure-inducing heart attack. One animal study demonstrated a 22% reduction in death over the 12 months following a heart attack.

Protect Yourself Against Cancer

Nearly 20 million Americans (almost 9% of us) have been diagnosed with some form of cancer.49 Cancer kills more than 567,000 US citizens annually, making it overall the second most common cause of death. Blueberries, with their rich supplies of flavonoids and other biologically active molecules, are uniquely equipped to block many of the complex processes that lead to cancer—and they do so through multiple mechanisms.

Blueberry extracts prevent development of pre-cancerous lesions. Many cancers, such as those of the colon and cervix, begin as so-called “pre-cancerous” lesions, or areas of abnormal, but not yet malignant, cell growth. Blueberry compounds sharply reduce the number of such abnormal tissues, by as much as 94% in the case of colon cancer.

Blueberry extracts slow tumor spread by invasion and metastasis. Solid cancers produce “protein-melting” enzymes that help them invade adjacent tissues and that enable them to metastasize, or spread to distant parts of the body. Blueberry flavonoids block those enzymes, helping to control cancer’s aggressive spread.

Blueberry extracts trigger cancer cells’ suicide. Normal cells are programmed to die if they replicate too fast, through a phenomenon called “apoptosis.” Cancerous cells, by contrast, ignore that programming, constantly doubling their population unchecked. Blueberry components restore normal programming and induce apoptosis in cells from a variety of cancers, putting the brakes on their rapid growth.

To date, these multiple pathways of cancer prevention have been successfully applied to reduce tumor occurrence, growth, and progression in experimental models of breast, colon, prostate, lung, and oral cancers.

Loss of memory and cognitive skills with age is frightening and tragic. Alzheimer’s disease is the sixth leading killer in America, causing more than 19,000 deaths annually and keeping nearly 232,000 people in nursing homes. Many of the remarkable healing powers of blueberries were first discovered in the area of neurocognitive diseases, and the evidence for their benefits continues to grow.

Blueberry components enter and remain in the brain. Not all substances that you consume make their way into your brain, thanks to the powerful “blood-brain-barrier.” While this barrier protects your brain from dangerous and toxic substances, it can also limit access to potentially beneficial substances. Nutrient molecules extracted from blueberries have been detected in measurable quantities in brain tissue, especially in areas that serve memory functions.

Blueberry flavonoids reduce the impact of the “Alzheimer’s Disease Protein.” People with Alzheimer’s and other neurodegenerative diseases have collections of abnormal brain proteins that cause memory loss and cognitive decline. Blueberry extracts interfere with both production of those proteins, and with their destructive impact on the brain.

Blueberry extracts protect brain tissue during stroke. Animals subjected to experimental strokes have smaller areas of infarction (brain cell death) if they are first supplemented with blueberries. They return sooner to normal activity levels than do control animals.

Blueberries have appropriately been labeled as “superfruits,” possessing the ability to block and even reverse many of the consequences of aging.

Long thought to mainly deliver their benefits through their antioxidant effects, blueberries are now recognized as having impacts on many different aging processes. In fact, recent studies prove that blueberry extracts can extend life span by significant amounts.

It’s the specific flavonoid components of blueberries, rather than the whole fruits, that provide so many health benefits. Those compounds are now seen to prevent obesity, ameliorate the high blood pressure, lipid disturbances, and sugar intolerance of the metabolic syndrome, reduce cardiovascular risk, prevent cancer, and of course protect brain function both after stroke and from neurodegenerative diseases.