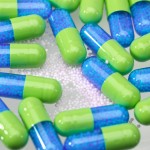 Scientists have successfully tracked the molecule that conveys the fullness signal to the brain, saying it could be used to make a revolutionary anti-appetite pill.

The molecule, known as acetate, is released into the bowels upon digestion of fiber, which abounds in plants and vegetables, Press TV reported.

The molecule then travels to the hypothalamus region of the brain, which controls hunger. Such pill would also dispose of cravings.

Unfortunately, processed food-rife in the modern-day diet – does not produce acetate when digested.

Prof Jimmy Bell, of the Medical Research Council, Cambridge, who collaborated in the research, said, ”It is exciting we have started to really understand what lies behind fiber’s natural ability to suppress our appetite and identified acetate as essential to the process.

”In the context of the growing rates of obesity in western countries, the findings of the research could inform potential methods to prevent weight gain.“

Professor Gary Frost of Imperial College London said, ”Unfortunately our digestive system has not yet evolved to deal with this modern diet.“

”The major challenge is to develop an approach that will deliver the amount of acetate needed to suppress appetite but in a form that is acceptable and safe for humans,“ Frost said.