All About Vitamin B2: Riboflavin 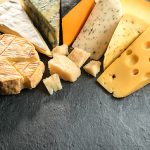 Riboflavin, also known as vitamin B2, was the second vitamin in the B complex to be discovered. Like its predecessor, vitamin B1, riboflavin is used by the body to processes fats, carbohydrates, and proteins.

So what exactly does vitamin B2 do for your health? Here’s the lowdown.

Vitamin B2 Protects the Eyes

Vitamin B2 is needed by the entire body, including the eyes. Because it removes oxidized glutathione from the eye lens, riboflavin could help protect against the development of cataracts.

Individuals who are deficient in vitamin B2 may experience sensitivity to light and decreased vision.

While riboflavin is essential for general health, it may also play a role in migraine prevention. A study of 49 patients suffering from migraines who received 400 milligrams (mg) of riboflavin for three months or more experienced a 68% improvement in the frequency/severity of migraines.

Another study using the same dose uncovered a reduction in migraine frequency and the need for pain relief.

Although other B vitamins (folate, vitamin B6, and vitamin B12) have been recognized for their ability to lower the level of homocysteine (an amino acid linked to heart attacks) in the blood, riboflavin can also help reduce this harmful compound, particularly in people with a genetic mutation associated with high homocysteine levels.

In a study of older men and women with low levels of riboflavin, supplementation with 10 mg per day significantly lowered homocysteine levels after four weeks.

Vitamin B2 May Prevent Colon Cancer

In addition to its role in the prevention of heart problems, B2 may reduce the risk of colorectal cancer.

In a study of 88,045 postmenopausal women, the total intake of riboflavin from food and supplements was associated with a reduced risk of disease by 19%.

Greater intake of B2 has also been associated with a reduction in the risk of breast  and lung cancer.

Vitamin B2 Helps with Parkinson’s Disease

Ensuring optimal riboflavin levels could also help men and women with Parkinson’s disease. A study of 31 Parkinson’s disease patients, all of whom had low B2 levels, found that supplementation with 30 mg every eight hours plus the elimination of red meat resulted in better motor function, which is impaired in the disease.

How Much Vitamin B2 Do You Need?

The Recommended Daily Allowance (RDA) for riboflavin is a little more than one milligram for adults; however, no toxicity has been observed at 400 milligrams daily.

Because B2 is readily excreted in the urine, intake of amounts greater than the RDA could safely guarantee optimal B2 levels if taken in divided doses.

Use of a B complex formula several times per day (or in a multivitamin formula) is the best way to supplement with B2.