Trainers, Doctors Tout Need To Be Active While Aging 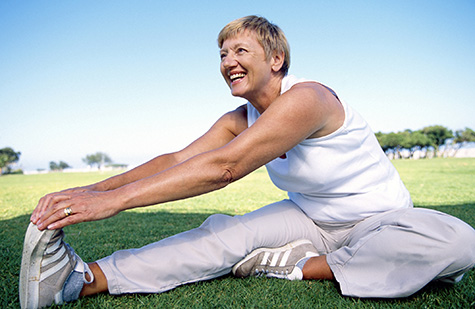 David Williams has always been an active guy. But when the 61-year-old could no longer hike on hunting trips without huffing and puffing and stopping to rest, Williams realized he had let his physical fitness slip away.

“If I want to enjoy the things I really enjoy, I have to be in the physical condition to do so,” Williams said. “Otherwise, I can watch, but I can’t participate.”

If Williams wanted to enjoy hunting or alpine skiing, if he wanted to be able to keep up with his active, teenage godchildren, he had to make his physical fitness more of a priority. So about three years ago, Williams started going to the gym and working out with Brian Stecker, a personal trainer who specializes in fitness for baby boomers.

About a year ago, Williams began a weight-loss program that required a diet overhaul and gym dedication. Since then, Williams has lost more than 100 pounds, going from about 320 pounds to 216 pounds. Now, he’s wearing the same size pants he wore as a junior in high school, and he’s keeping up with the younger guys and gals.

“There’s absolutely no comparison to then and now,” said Williams, who lives in Hockinson.

Staying physically active isn’t always a priority as people age. But, health experts argue, it should be.

In addition, women begin to lose muscle mass and their metabolism slows. For men, declining testosterone levels lead to a loss of lean tissue, said Stecker of Boomer Fitness.

“Exercise slows down all those things,” Stecker said. “It’s the fountain of youth.”

The hormone boosts people get from exercising will also improve mood, and active lifestyles can help prevent chronic diseases, such as Type 2 diabetes and high blood pressure, Stecker said.

But jumping into a fitness routine shouldn’t be done with haste. People who live largely sedentary lives should consult with their physician before beginning an exercise regime, Tan said.

“Most physical activity is quite safe, except when you’ve been a couch potato for years,” he said.

Tan recommends people ease into their routine and listen to their body. The first few days of exercising, the body will likely ache. But if the ache or pain persists, listen to the body and make changes, he said.

Stecker encourages people to start with vigorous walking and daily stretching to build the range of motion needed to exercise. From there, they can add in more challenging activities, he said.

Ultimately, Stecker recommends at least 30 minutes of cardiovascular activity six days a week. In addition, he suggests 30 to 50 minutes of strength training three or four days per week and daily stretching.

Like Williams, many of the baby boomers Stecker trains are trying to achieve long-term health after realizing they can’t enjoy the things they used to. After focusing on careers and families, they realized they’ve let their own health slide, Stecker said. Some are watching their parents struggle with various ailments and medications and want better for themselves, he said.

“They’re starting to see the reality of the aging process and saying, ‘I need to make a change,'” Stecker said.

What began as a necessary lifestyle change for Williams has turned into a passion.

“I’m addicted,” Williams said. “If I don’t go to the gym, if I don’t work out, I kind of suffer from withdrawals. I get anxious.”

And Williams has noticed more and more older people making the gym a priority.

That’s exactly what advocates for active aging want to see.

“You’re never too old to get started,” Tan said.