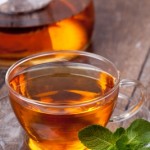 Danan Gu and associates analyzed data from 13,429 men and 19,177 women aged 65 years and older who participated in the Chinese Longitudinal Health Longevity Survey.  Subject interviews provided data on frequency of tea consumption and other data.  Tea drinking was categorized as daily or almost daily, sometimes (two to four times per week), or seldom or never.

Among men, those who reported drinking tea almost every day had up to a 20% lower risk of dying in comparison with men who seldom drank the beverage.  Frequency of tea intake did not appear to have an effect on mortality among women in this study.  However, the authors did note that for both sexes, high frequency of tea consumption decreases the risk of cognitive impairment, cumulative health deficits, cardiovascular disease, and disability in self-care.

Editor’s Note:  In their discussion, the authors suggest that the higher prevalence of smoking among older Chinese men in comparison with women could make the protective effects of tea more noticeable in this group.