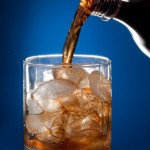 As if the health risks of soda weren’t already enough, a new study shows it may also be linked to accelerated aging.

In a study, telomeres, the end caps of DNA strands that serve as a marker for aging, were found to be shortened in people who drink soda.

The results were published in the American Journal for Public Health.

In previous studies, the length of telomeres has been associated with disease and mortality. Shortened telomeres are linked to cancer, heart disease, and diabetes.

Researchers surveyed over 5,000 Americans between the ages of 20 to 65 years. They sampled healthy adults with no prior history of diabetes or heart disease. Information was taken from the National Health and Nutrition Examination Surveys, the largest ongoing nutrition survey in America.

The telomere length of white blood cells were measured and compared to a 24-hour survey which analyzed the participants’ consumption of fruit juice, sugar-sweetened soda, and diet soda.

On average, the participants drank about 12 ounces of sugar-sweetened soda daily. The researchers found an association between sugary sodas and shortened telomere length. No association was found for diet soda.

Adults drinking 100% fruit juice had slightly longer telomeres. The effects of drinking a 20- ounce soda were similar to the harmful effects of smoking or not exercising, aging cells by about five years.

There is one major limitation to this study: the scientists only tracked soda consumption for one day. Further studies are needed to evaluate the long-term effects of soda drinking on aging.

So far we know the consumption of excess sugar is linked to chronic diseases such as diabetes, heart disease, and cancer — which not surprisingly affect the human lifespan. This one study emphasizes the damaging effects on a cellular level. It further justifies the need to limit dietary sugar.

With an estimated current intake of 20 teaspoons daily on average, many Americans far exceed the limitations set by nutrition experts, and soda is a significant source of sugar in the American diet.

This study is yet another reminder of what soda can potentially do to the human body. Avoid it!