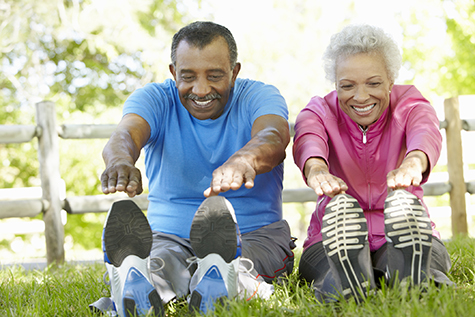 Among the biggest risk factors for dementia are diabetes and mid-life obesity, which can double your chances of dementia at a later age. Links have also been found between elevated blood pressure, high cholesterol levels and the risk of dementia, although these are not conclusive. Monitoring your weight and cardiovascular health in middle age could greatly reduce your likelihood of dementia.

The brain may be affected by the long-term consequences of heavy smoking. Scientists have found smoking to increase the risk of cognitive decline in old age, with one study showing that middle-aged people who smoked more than two packs a day more than doubled their risk of later-life dementia.

Numerous studies have shown that regular, vigorous physical activity – and in some cases, even mild exercise such as walking – can preserve your faculties in later life. Staying active is particularly important for the elderly, with studies finding that older individuals who began a regular exercise programme experienced improved cognitive function. However, younger people should avoid sports where they are prone to repeated head traumas, such as boxing or even football. There is growing evidence that even moderate traumas increase the risk of developing certain forms of dementia.

People with more years of school and university education are known to have a lower risk of dementia, but there is evidence that everyone can reduce their risk of dementia through trying new things as they get older. Taking up new hobbies, learning new skills and partaking in a daily intellectual activity such as doing crossword puzzles are all thought to have neuroprotective effects.

Maintaining social activities as you get older, such as going to clubs or volunteering, has been found to have a protective effect against dementia. Studies have shown that individuals who maintain a larger social network into old age tend to have better cognitive functions and a reduced risk of cognitive decline.

Scientists are still not completely clear on how various nutrients, vitamins and food groups affect your risk of dementia. However, there have been a few studies focusing on the Mediterranean diet – which consists of small amounts of meat, and an emphasis on whole grains, fruits, vegetables, fish, nuts and olive oil – that suggest it can reduce risk of dementia, possibly by preventing high blood pressure.

Sleep disturbances, for example chronic insomnia, have been linked to increased risk for cognitive decline in later life. Taking steps to deal with any sleep problems could reduce your chances of getting dementia. However scientists still don’t understand exactly how disturbed sleep may contribute to the condition, and whether certain dysfunctional sleep patterns pose more of a risk than others.