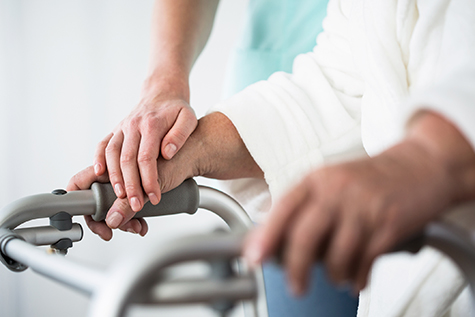 The American Society of Anesthesiologists issued the following news release:

Think the shorter winter days, ice and snow put your older loved one at greater risk for a fall and broken hip? Think again. A preliminary study presented at the ANESTHESIOLOGY(R) 2017 annual meeting shows that the majority of falls occur during warm months, and a greater number of the falls happen indoors rather than out.

“Falls are one of the most common health concerns facing the elderly today,” said Jason Guercio, M.D., M.B.A., study author, North American Partners in Anesthesiology at The Hospital of Central Connecticut in New Britain. “And this population is the fastest growing segment of the U.S. People 65 and older are predicted to more than double in number by 2050, increasing from 39 million to 89 million. Falls leading to fracture can result in disability and even death. Understanding the risk factors for fractures can help to focus efforts on decreasing them, and guide resources and appropriate interventions to prevent them.”

In the retrospective observational study, 544 patients treated at The Hospital of Central Connecticut for hip fracture from 2013 to 2016 were analyzed for the time of year the fracture occurred and whether it happened in- or outdoors. The authors defined “cold” months as November 1 through April 30, and “warm” months from May 1 through October 31.

The most common reason for both indoor and outdoor hip fracture was tripping over an obstacle (43.3 percent for indoor and 57.1 percent for outdoor). Inside homes, the most common obstacle appeared to be throw rugs. For indoor fractures, the second leading cause was falling out of bed. For outdoor fractures, the second and third leading causes were being struck by or falling from a vehicle or falling on or down stairs.

“It is counterintuitive that the risk for hip fracture would be higher in warm months, as ice and snow would appear to be significant fall risks,” said Dr. Guercio. “Given the results of this study, it appears that efforts to decrease fall risk among the elderly living in cold climates should not be preferentially aimed at preventing outdoor fractures in winter, but should focus on conditions present throughout the year, and most importantly on mitigating indoor risk.”