Add Protein To Maintain Muscle Mass As You Age 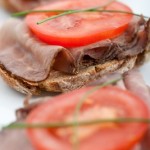 Foods packed with protein aren’t just for young weightlifting bodybuilders anymore. Emerging research links eating high-quality protein foods with healthy muscles no matter how much you can press to impress or how many birthdays have passed.

A cup of tea and a cookie may seem like a nice afternoon snack for seniors looking to relax and have a nibble, but it’s not doing their aging muscles any favors. Muscle mass declines at a rate of 1 to 2 percent a year from age 50 onwards (hello, baby boomers!).

But snack time might be able to help turn things around if it’s fueled with protein-rich foods such as a hard-boiled egg, a glass of fat-free milk or half of a roast beef sandwich.

“It’s estimated that 20 percent of people between age 51 and 70 have an inadequate protein intake,” says epidemiologist Paul Jacques, of the Human Nutrition Research Center on Aging at Tufts University.

Jacques and colleagues reported in the British Journal of Nutrition that the win-win of physical activity (working with weights or aerobic exercise such as swimming or cycling) plus consuming adequate dietary protein can protect and even increase muscle mass in middle-aged and older Americans. The U.S. Department of Agriculture research shows that consuming 90 grams of high-quality protein a day supports muscle strengthening.

For reference, there are 7 grams of protein in an ounce of cooked meat, 8 grams in a cup of milk and 6 grams in one egg.

The medical term for the loss of muscle mass is a condition called sarcopenia.

Registered dietitian Susan Hewlings, assistant professor at the University of Central Florida College of Medicine in Orlando, says, “We’re seeing sarcopenia, which commonly occurs in the elderly, in younger subjects in their early to mid-50s.”

Experts suggest balancing protein intake throughout the day with at least 30 grams per meal because muscles are hungry for amino acids found in protein foods all day long.

There goes that diet plan to starve all day and splurge on a big steak for dinner.

In fact, Robert Wolfe, professor of geriatrics at University of Arkansas for Medical Sciences in Little Rock, warns, “When there are periods of the day when no amino acids are being absorbed from the gut, muscle serves as the only significant reservoir of protein.”

That means your body starts robbing protein in muscles to keep other tissues humming along.

Hewlings emphasized that protein alone can’t do the job of preserving and building muscles as we age, “I call exercise the ‘poor man’s plastic surgery.’ Physical activity boosts lean body mass only if you’ve got enough protein in your diet.”