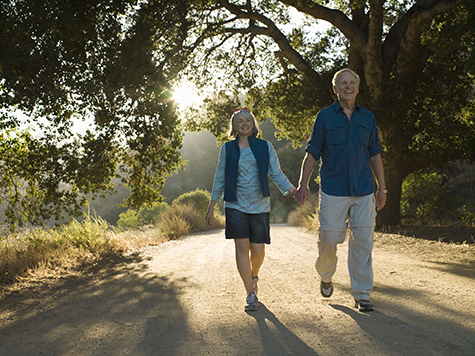 Americans don’t live as long as people in most other high-income countries, but modest lifestyle changes could increase their lifespan by as much as 14 years, according to a new study.

The study, published Monday in the American Heart Association journal Circulation, examined how lifestyle factors like regular physical activity, not smoking, moderate drinking and a healthy weight and diet might raise life expectancy among Americans.

Although the U.S. is one of the world’s wealthiest nations, it ranks 53rd in the world for life expectancy at birth, according to 2015 data from the World Health Organization.

Researchers at Harvard University studied data from 123,219 patients compiled during a 34-year period in the Nurses’ Health Study and 28 years of the Professionals Follow-up Study.

They then focused on patients with five “low risk lifestyle factors”: never smoking; exercising for 30 minutes a day at a moderate to vigorous level (including brisk walking); having a normal body mass index; eating a healthy diet, and consuming a moderate level of alcohol, defined as no more than one drink a day for women and two drinks a day for men.

The researchers found that 50-year-old women who engaged in all five low-risk factors lived an average age of 93.1 years — 14 years longer than women who adopted none of the lifestyle factors.

Men at 50 who adopted all five factors lived to an average age of 87.6, or 12.2 years longer than men who had none of the five low-risk factors.

“If more Americans adopted healthy lifestyles, it could have quite a big impact on life expectancy,” said the study’s lead author, Dr. Yanping Li, a research scientist at Harvard University’s T.H. Chan School of Public Health.

“Americans put a high priority on health care, but our findings support the idea that we should be putting more effort on prevention than on treatment,” she said.

Yet Li said life expectancy rates should have risen even higher due to smoking cessation rates, but they were counterbalanced by the high rate of people with poor diets and sedentary lifestyles.

“It’s a key point, because obesity prevalence keeps increasing in America,” she said.

Dr. Donald Lloyd-Jones, a cardiologist at the Northwestern University Feinberg School of Medicine, pointed out that the study didn’t delve into how socioeconomic factors often influence unhealthy lifestyle choices, such as heavy drinking.

Lloyd-Jones, who was not involved in the study, said he’d like to see future research that pinpoints the best ways to get people to adopt the five low-risk lifestyle factors that were examined in the study.

“Behavior change is one of the hardest things for adults to accomplish,” he said.

“Most of us have had the experience where it’s relatively easy to lose 10 pounds, and then it comes right back. We need to find ways to help people adopt changes for the long haul.”

The new findings show that takings small steps — like a brisk 30-minute walk five times a week — can add up to a longer “healthspan,” a term which describes how long people are healthy, not just how long they live, Lloyd-Jones said.

“What encouraged me the most about this data is it does not take perfection to be healthy,” he said. “These were not people who were running marathons or adopting vegan diets. You just need to adopt small goals — like eating more fruits and vegetables — achieve them, and move on to another step. Even modest changes can have a big impact in the long-term.”