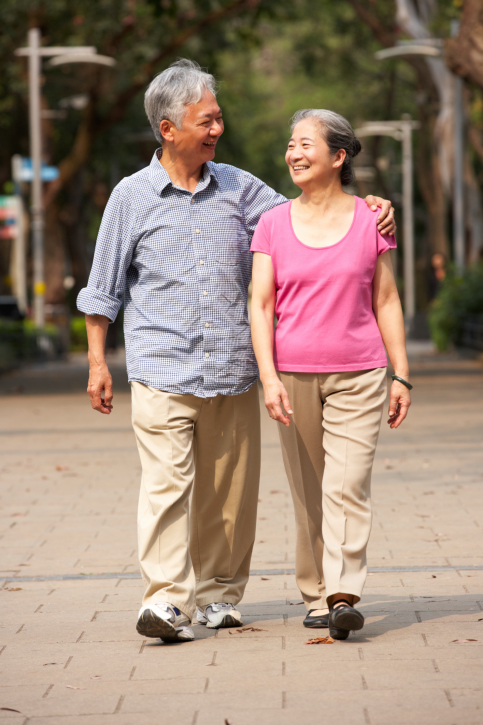 New research shows that exercise can delay the ageing process, with experts suggesting one walk a day could halve the risk of heart attack death and add seven years to the lifespan

Just 25 minutes of brisk walking a day could add to seven years to your life, heart experts have said.

Researchers said moderate exercise could halve the risk of heart attack death among those in their fifties and sixties.

Researchers said moderate exercise could halve the risk of heart attack death among those in their 50s and 60s. Provided to China Daily

The new research, recently presented at the European Society of Cardiology (ESC) congress suggests that regular exercise can delay the ageing process.

The German study put men and women aged between 30 and 60 on a daily program of exercise.

They were selected because until then they had not been regular exercisers.

The study then tracked key markers of ageing in the blood. Within just six months, these showed changes in the body which help to repair the DNA.

Experts said just 25 minutes of brisk walking or slow jogging every day could buy extra years of health – and happiness.

Sanjay Sharma, professor of inherited cardiac diseases in sports cardiology at St George’s University Hospitals NHS Foundation Trust in London, said: “When you exercise moderately, you reduce your risk of dying from a heart attack when you’re in your 50s and 60s by 50 per cent. That’s a really big deal.”

Everyone should try to build in such habits to their daily routine, he said.

“Exercise buys you three to seven additional years of life. It is an anti-depressant, it improves cognitive function and there is now evidence that it may retard the onset of dementia,” the cardiologist said.

Experts said the study showed that exercise was able to delay the process of ageing.

“We may never avoid becoming completely old, but we may delay the time we become old,” Prof Sharma said.

Cardiologists at the conferences said it was never too late to start exercising.

Separate studies have found that people who start exercising at the age of 70 are less likely to go on to develop atrial fibrillation, a heart rhythm disturbance that affects about 10 per cent of people over 80

The new research was carried out by a team at Saarland University in Germany who introduced a group of non-exercising but otherwise healthy and non-smoking people to a staged exercise programme.

It showed that aerobic exercise, high intensity interval training and strength training all have a positive impact on markers of ageing.

The authors noted that endurance exercise and high intensity exercise may be more efficient than just lifting weights, as they further increase telomerase activity, which in turn helps to repair DNA as it gets old.

They said that by measuring the increase of telomerase activity and decrease of senescence marker p16 (both makers of cellular ageing in the blood) over a six month period, doctors were able to show that regular exercise had triggered the anti-ageing process.

“The study brings a bit more understanding of why physical activity has that effect. It helps us understand the process of cellular ageing as that’s what drives our organ system and body ageing and the effects physical activity can have on the cellular level,” Christi Deaton, Florence Nightingale Foundation Professor of Clinical Nursing Research atCambridge Institute of Public Health, University of Cambridge School of Clinical Medicine, said.

“The more active you are, and it doesn’t matter when you start, the more benefit you are going to have.

Professor Peter Weissberg, Medical Director at the British Heart Foundation, said: “We know that regular exercise reduces your risk of cardiovascular disease. This study provides a possible mechanism for how this is achieved. Regardless of the underlying process, however, everyone should try to do 150 minutes of exercise a week to help them stay heart healthy.”

Earlier this year, experts highlighted studies which suggest just 20 minutes of vigorous exercise a week is enough to significantly reduce the risk of dying prematurely and is far more achievable than current recommendations.