It Was a Special Brunch for President and Mrs. Carter 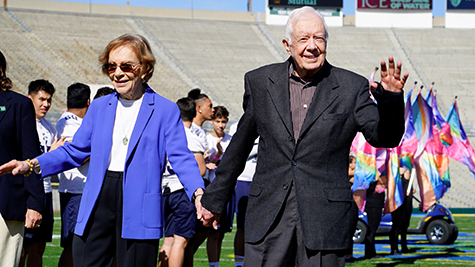 Rosalynn Carter is a truly unforgettable American hero who inspires everyone she meets. Recently, she arrived in Los Angeles to be honored as one of the most accomplished and important First Ladies in United States history. She is a woman I greatly admire, and whom I met for the first time last August when I traveled from Los Angeles to Plains, Georgia with a delegation from St. Genevieve School in Panorama City, CA. The school’s president and principal, Dan Horn, traveled to Plains with the St. Genevieve Jazz Band and conductor Carlos Dominguez, where they celebrated Mrs. Carter’s 90th birthday with a musical performance. 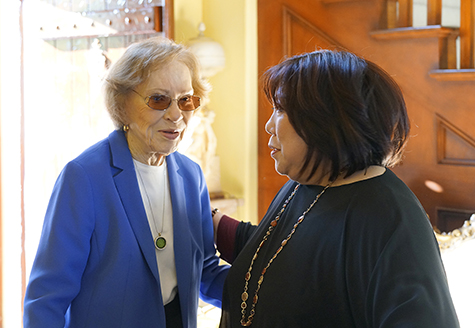 At that time, St. Genevieve’s students had been working on a film about Mrs. Carter, DEAR ROSALYNN, for more than four years and were ready to premiere the film this year. When Mr. Horn invited Mrs. Carter to attend, to everyone’s delight, she immediately accepted.

President Jimmy Carter and Rosalynn, who have a long-term relationship with the school, both attended the premiere event on Feb. 2 at the Pasadena Rose Bowl. Mr. Horn and St. Genevieve’s high school and elementary school orchestrated and hosted the Rose Bowl celebration, which was a fundraising event for St. Genevieve’s Inspiration Building.

Mrs. Carter has worked tirelessly throughout her life to make the world a better place. From bringing mental illness out of the shadows and fighting for better mental health care, to addressing our nation’s caregiving crisis, fighting for women’s rights, and improving the lot of the world’s poorest people, Mrs. Carter has been an unstoppable force for good. 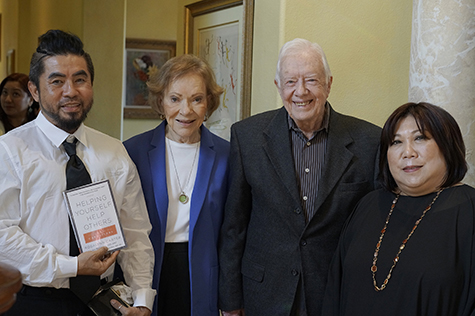 Before the Rose Bowl screening, I had the distinct honor of hosting President and Mrs. Carter at my home in La Cañada Flintridge for a First Friday Mass Devotion and brunch. The Carters and a number of their family members and friends arrived at my home early that morning. My husband Rupert and I were part of the greeting party that also included such special guests as La Cañada’s Mayor Michael Davitt and his wife Alison, and Philippine Consul General Adelio Cruz and his wife Catherine.

The main celebrant of the Mass was Monsignor Antonio Cacciapuoti of St. Bede’s Parish in LaCañada along with co-celebrants Father Alden Sison of St. Genevieve Church, Father Paul Wolkovits from the Catholic Diocese of Orlando, Florida, and the Carters’ pastor, Brandon Patterson of the Maranatha Baptist Church in Plains.

There to celebrate the special guests and to lead in song were cantors Carissa Dizon (who is a former St. Genevieve student) and Dino Padallan, a member of the Philippine Chamber Singers. They were accompanied by pianist Sara Shakliyan. When the Mass ended, both Rosalynn and President Carter got up to thank the guests and say a prayer of gratitude. 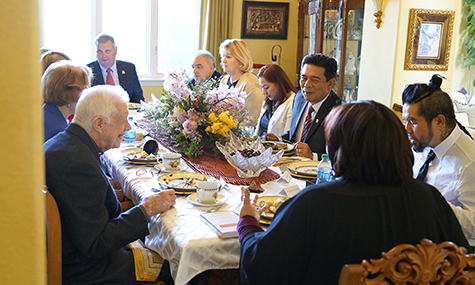 The Mass was followed by a beautiful brunch catered by Heirloom LA Catering. The Carters enjoyed the food and lively conversation with guests. They particularly liked Heirloom’s signature Lasagna Cupcakes, which are so special they’re even trademarked. I also provided a variety of exotic fruits that are featured in my cookbooks and on this website in the Recipe Section, including rambutan, mangoes, jackfruit, sweet tamarind, tangerines, longan, and lychees. For some of my guests, it was the first time they had ever tasted some of these fruits, but I explained that each of them is delicious and loaded with health benefits. Delicious quiches were also on the buffet menu. One of my favorites is my Carrot Quiche recipe, which is loaded with age-defying FoodTrients, whenever I have guests over for brunch.

After brunch, everyone headed to the Rose Bowl for the premiere of DEAR ROSALYNN and a lively line-up of entertainment provided by St. Genevieve’s talented students. Then, after the viewing of the documentary, we were invited to join President and Mrs. Carter for lunch at the Rose Bowl. It was indeed both an inspiring and a delicious day for all!