Pizza: Slicing It with FoodTrients 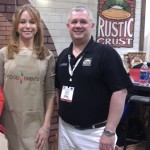 Recently, I was asked to appear in the Rustic Crust (www.rusticcrust.com) booth at the Natural Products Expo West at the Anaheim Convention Center in California. Actress and natural-food advocate Jamie Luner appeared alongside me, and the FoodTrients team passed out samples of four dips and spreads I created specifically for Rustic Crust ciabatta (see recipes). While in the booth, I was inspired to try out Rustic Crust Tuscan Six-Grain pizza crust and their Great Grains organic pizza crust. When I got home, I developed two pizza recipes using the FoodTrients formula of adding anti-aging ingredients wherever possible to classic foods in a delicious way.

Below are recipes for my Roasted Eggplant and Pepperoni Pizza and Pesto Whole-Grain Pizza with Artichokes. The nutty flavor of the Tuscan Six-Grain crust suggested it would go very well with eggplant and olives. I also used Rustic Crust’s Old-World Pizza Sauce because it had a very bright, tomato-y flavor and wasn’t too sweet. You can make your own sauce if you prefer.

The FoodTrient anthocyanins in eggplant improve capillary function for beautiful skin and a healthy brain, and they inhibit the growth of cancer cells. I chose Japanese eggplant because its small circumference yields perfect rounds for topping a pizza, but you can use European eggplant. I roast the eggplant in olive oil (which has FoodTrient omega-3 oils for soft skin) and garlic salt (which has the FoodTrient allicin that thins the blood and lowers cholesterol). A few tablespoons of my Olive & Watercress Tapenade adds zing, as do red pepper flakes (which also provide the immunity-boosting FoodTrient vitamin C). The FoodTrient lycopene in the tomato sauce is good for artery health and therefore heart health. I added pepperoni because I like it, not because of its nutritional value. You can leave it off if you’re worried about eating cured meats.

¼ cup olive oil (reserve 2 Tbsp. for brushing on the crust)

Toss eggplant slices in olive oil and spices and lay in a single layer on a rimmed cookie sheet. Roast in a 400-degree oven for about 40 minutes, or until golden brown. Brush pizza crust with reserved olive oil. Spread crust evenly with pizza sauce and sprinkle with shredded cheese. Arrange pepperoni slices and enough slices of eggplant to fill the pie. You won’t use all of the eggplant slices. Dot the pie with tapenade and bake at 425 degrees for 8–12 minutes, or until the cheese melts and is slightly brown.

Olives are full of FoodTrient omega-3 fatty acids, which are good for the heart. Garlic has allicin, another artery-friendly FoodTrient compound. Both watercress and parsley contain—when eaten raw—the FoodTrients chlorophyll and vitamin C (an anti-inflammatory), as well as heart-protecting folic acid. Olives do contain a lot of salt, so avoid this recipe if you have hypertension.

Place all ingredients in bowl of food processor. Blend together for 5 or 6 seconds. Scrape down the bowl and blend another 5 seconds, or until the mixture is somewhat granular. Be careful not to over-blend it into a paste.

My Kale Cashew Pesto is so full of anti-aging ingredients, I don’t have room to list them all here. (See the full recipe below.) Pesto is a versatile spread that works on pasta, in sandwiches, in soups, and on this delicious pizza in place of tomato sauce. Artichokes pair nicely with pesto, and they contain the FoodTrient lutein, which reduces the risk of age-related macular degeneration and cataracts. I used to steam, trim, and de-choke my own artichokes until I met Jane MacDonald at the Natural Foods Expo West. She is the president of Monterey Farms in Salinas, California. She takes fresh artichoke hearts, steams them, tosses them in olive oil, and grills them. Then she vacuum-packs them without adding any preservatives. You can buy her ArtiHearts at Whole Foods or order them by the case online at her website

Brush crust with olive oil. Spread pesto evenly over the whole pie. Scatter the shredded cheese evenly across. Arrange the artichoke hearts on top. Bake at 425 degrees for 10–12 minutes, or until the cheese melts and is slightly brown.

Kale is practically a wonder drug, what with all its antioxidant power from the FoodTrients indoles, carotenoids, choline, quercitin, vitamin C, as well as vitamin A and calcium. It protects against many kinds of cancer, as do olive oil and the sulfur compounds in garlic. Basil contains the FoodTrient lycopene, another cancer-fighter. Cashews contain copper and the FoodTrient zinc, which boosts the immune system. They are a sweet nut that helps to balance the bitterness of the kale. I use Tuscan kale, a tenderer, less bitter version of the green. It is also called lacinato kale, black kale, or cavolo nero. Young purple kale works as well.