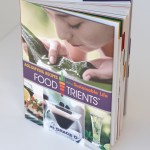 Recently, Grace O made an appearance on the Culinary Confessions Radio Show hosted by Kim and Don on 1440 KAZG (KimandDon.com) to talk about her cookbook, FOODTRIENTS: Age-Defying Recipes for a Sustainable Life. Don loved that baked lobster tails are good for the brain. Lobster has omega-3 fatty acids which the brain needs to function properly.

Grace talked about how her dad got her thinking about healthy eating after her mother died. She began to seriously take his advice once she turned 40, she revealed. He was truly the inspiration for her whole FoodTrients program and cookbook.

Kim was intrigued by the moringa tree and the benefits of its leaves, so Grace talked about how she cooks with it and where to get its leaves here inAmerica.

Don was surprised at how good mustard is for us. Grace described its anti-inflammatory properties and how that helps reduce swelling in our arteries, minimizes allergic reactions, and keeps skin redness down.

Kim was excited to see a bitter melon recipe in the FoodTrients cookbook. She had always wanted to cook with it, but was intimidated by its bitter taste. Grace explained that she only has to blanche the bitter melon in hot water with a bit of baking soda to extract most of the bitter taste.

Kim was also thrilled to see a sauce recipe in the FoodTrients cookbook using turmeric. Kim had never thought about using turmeric in quite that way before. Grace admitted that if she had to pick a favorite anti-aging ingredient from the book, it would be turmeric. Turmeric is a powerful antioxidant with anti-inflammatory properties. Grace recommends eating it at least once per week.

Kim and Don both remarked that they loved the beautiful photographs throughout the book and the fact that Grace included desserts in her cookbook. You can listen to the full radio interview here.