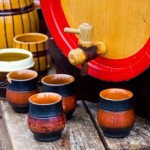 When I was a teenager, my mom and I made atchara together. Atchara is a sweet-and-sour pickle made from green, unripe papayas and other vegetables. Eaten with grilled pork or fried fish, it’s considered the national dish of the Philippines (see our family recipe below). We also used to make our own pickled cucumbers—both the sweet kind and the salty kind. And because there were almost no German delis at the time, my mother fermented her own sauerkraut and grinding and stuffing her own sausages.

Fermentation—the process of converting sugars into ethanol—has a long history. Because fermentation preserves food, people have been motivated to practice it successfully for thousands of years. Fermentation destroys the pathogenic microorganisms in food that cause spoilage. It results in such alcoholic beverages as beer, wine, hard cider, and sake. Sometimes in food recipes, fermentation is combined with salting or curing for additional preservative properties.

My mom taught a class in food preservation techniques in her cooking school in the Philippines, but many cultures have recipes for fermented foods like atchara. The French and Italians have been ripening cheese and sausages in cool caves for as long as anyone remembers. Germans are masters at pickling vegetables such as sauerkraut and, of course, pickles. The Greeks first learned how to cure olives. Koreans came up with kimchi, a very spicy fermented cabbage and red pepper dish that’s traditionally buried underground while fermenting. (I use napa cabbage, rock salt, ginger, scallions, and cayenne pepper in my kimchi.) The Japanese make miso, a soybean-rice-barley paste that is allowed to ripen for up to several years. The English invented Worcestershire sauce—a brew of anchovies, malt vinegar, tamarind, molasses, and spices—which ages in wooden barrels. Turkey, India, and Iran introduced yogurt to the world. And America contributed Tabasco sauce, a fermented mass of red peppers mixed with vinegar and aged in Scotch barrels.

Fermentation produces lactic acid, an antibacterial agent, and lactic-acid bacteria (often called probiotics), which promote the growth of healthy microflora in the gut. The intestines are the main component of our immune system, so when our intestinal flora is in optimal balance, we’re healthier. Also, the process of fermentation rarely destroys any vitamins, minerals, or FoodTrients contained in the original ingredients. It simply adds beneficial probiotics and enzymes to the already healthy ingredients, such as peppers, cabbage, cucumbers, olives, rice, or milk. Many fermented foods (especially those containing vinegar) have a low pH (higher acidity). Ingesting acidic foods can be good for digestion, especially in older people, since our stomachs produce less acid as we age. The acid helps break down food in our stomach, releasing more nutrients and decreasing heartburn. Eating vinegar-laden foods also slows the emptying of the stomach, keeping us feeling full with less food.

The beneficial microorganisms in fermented foods can be eliminated through pasteurizing or heating, so these foods are healthiest when eaten raw. Most of the olives and pickles on store shelves have been pasteurized and are, unfortunately, probiotic free. Traditional Greek olives and home-cured pickles are much better sources of probiotics.

Now for that atchara recipe: My mom and I began by grating the green papayas into long, thin strips until we had about 5 cups. We made florets out of a few carrots to add beauty and color to the pickle. We also cut up a jicama and one red bell pepper to add more crunch and color. Sometimes we boiled and shelled quail eggs , too. Then we made our pickling solution: We put 2 cups of vinegar in a saucepan with 1 cup of sugar, 2 Tbsp. of garlic, 1 tsp. of salt, and 1 inch of fresh, peeled ginger cut into thin strips. We boiled the liquid for 5 minutes, making sure all of the sugar dissolved. Then we let the solution cool so that the green papaya and other veggies would not cook when they were added to the solution. While the liquid was cooling, we prepared our canning jars by boiling them in water. Then it was a matter of adding our vegetables to the jar and covering them with our pickling solution. Once the jars were sealed, we put them in the refrigerator to ferment for at least a week.